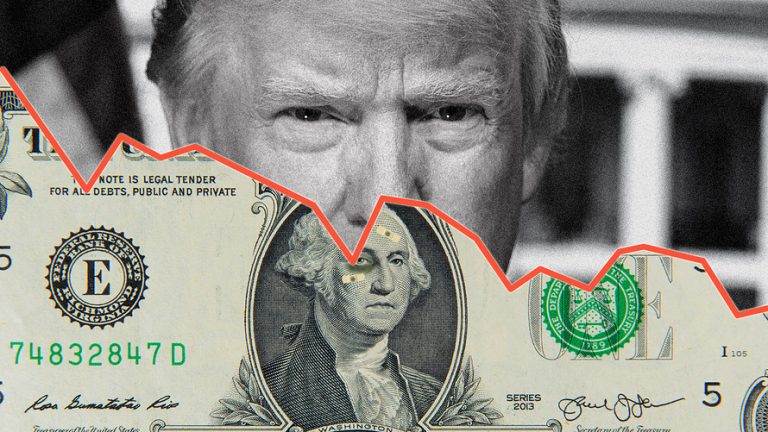 NEW YORK: U.S. President Donald Trump may not be happy about the strength of the U.S. dollar, but the greenback’s recent rally may partly be a product of his own making.

The U.S. dollar has been climbing against major currencies for several months, with the dollar index up nearly 7.0 percent over the last three months and on Thursday hit a one year high.

The dollar has strengthened since late 2015 as the Federal Reserve began raising interest rates against a background of steady economic growth, slowly rising inflation and the lowest U.S. unemployment rate since the 1960s.

The Fed has raised rates twice this year and is expected to raise rates a couple more times by year end which may attract more foreign into the U.S. dollar with monetary policy remaining loose in Europe and Japan, analysts said.

In a break with the usual practice by U.S. presidents, Trump has been unusually vocal about the dollar, publicly criticizing its strength several times, though analysts question whether his frequent rhetoric will have a lasting impact.

In a CNBC television interview on Thursday and again on Friday, Trump said he was concerned about the potential impact of a stronger dollar on American exports.

But investors and traders attribute some of the gains to the Trump administration’s tax cuts which are widening the fiscal deficit, leading to more government borrowing, and the imposition of import tariffs against China, Europe, Mexico and Canada which may contribute to inflation.

The $1.5 trillion tax cut passed by Congress in December last year, and the $1.3 trillion spending bill enacted in March, have pushed forecasts for the fiscal deficit higher.

As a result, by 2020 the U.S. government’s debt levels may be the highest since World War Two, according to the Congressional Budget Office in June.

While the Federal Reserve is raising short term interest rates in the face of consumer price inflation running at 2.9 percent annually in June, longer term bond yields may rise to attract foreign capital to finance the wider fiscal deficit and in turn keep the U.S. dollar strong.

But analysts also attribute some of the dollar’s strength to the escalating tensions over trade policy between the United States and many of its key trading partners, with investors betting the dollar will gain at the expense of emerging market currencies which are dependent on commodity exports.

Companies in the U.S. and other countries may find themselves less able to compete globally as import tariffs contribute to rising input costs, higher consumer prices, and lower demand for commodities from emerging markets as a result.

Trump, in the CNBC interview on Friday, said he was ready to impose tariffs on all $500 billion of imported goods from China, potentially further escalating a trade clash.

Even though the dollar does tend to react sharply to Trump’s words in the short term, analysts say there appears to be limited lasting impact and they do not expect that to change.

The impact on the dollar could be a little more lasting if Trump makes it a point to attack the dollar’s strength repeatedly.

Trump’s remarks about the greenback also struck some as ironic, given his strong words accusing the European Union and China of manipulating their respective currencies.