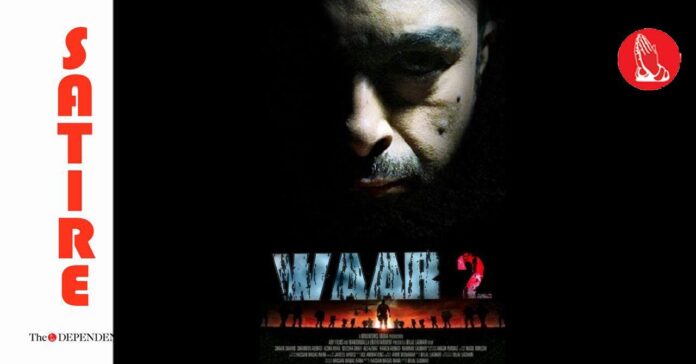 RAWALPINDI – The much awaited sequel of Pakistan’s number one blockbuster Waar produced by the number one production house and starring the number one actor will see Shaan Shahid in a unique avatar, playing an underplayed role of a patriotic army official silencing the enemies of Pakistan.

According to sources, the sequel of the 2013 action-thriller, directed by Bilal Lashari, will see Shaan play a soldier who hunts down overseas actors, artistes and celebrities for refusing to condemn the brutalities of their armies.

“You know how we see all these actors and stars who rigidly and jingoistically cheer on for their army while they abduct dissenting voices, wage war against marginalised ethnicities, and brutally silence any criticism as being anti-national? Shaan’s role is that of a soldier who targets such actors,” revealed a member of the Waar 2 production corps while talking to The Dependent.

Sources within the production unit of Waar 2, the shooting for which began as far back as 2015, further reveal that Shaan’s character in the film will be especially ruthless on those actors who actually take a moral high-ground on others’ supporting nationalist majoritarianism in their own countries, while they themselves star in films that perpetuate a hypernationalist narrative at home.

“They talk about rights and humanitarianism when talking about the cruelties and abuses of other armies, but when it comes to their own armies they actually star in military sponsored films often playing roles of military officers of an army that is committing violence and atrocities at will. Shaan’s character will expose the hypocrisy of such actors in a thriller every bit as patriotic as Waar 1, but twice as elevated on the moral high-ground,” revealed another producer from the corps.

The producers ensured that the film will be so effective that it will open the eyes of actors from countries with the most inhumane and goriest armies, especially India and Israel.

“Watch out Priyanka Chopra and Gal Gadot, Shaan Shahid is coming for you!” the producer added.