Fawad Alam starts long career of not being given chance to work with Mahira, Mehwish and Maya 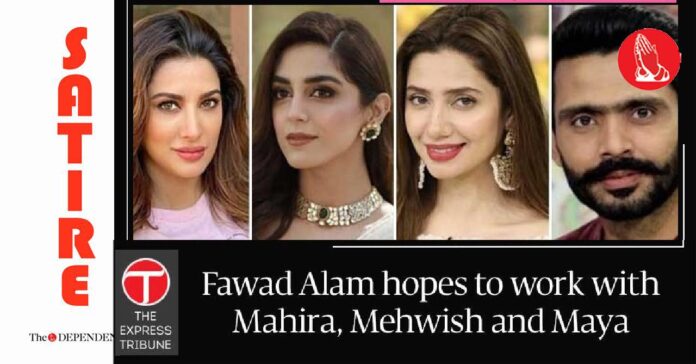 LAHORE – After completing the final warm-up match before the Test squad leaves for the upcoming tour of Zimbabwe, middle-order batsman Fawad Alam braced himself for a decade-long struggle of not being given chance to work with Mahira Khan, Mehwish Hayat and Maya Ali.

The cricketer who wrapped up the shooting for upcoming web series for Urduflix titled Khudkash Muhabbat revealed in an interview this week that he would like to work with Mahira, Mehwish and Maya, following which he has told The Dependent that he is now ready for a long struggle to be selected for roles.

“I’m ecstatic after completing my debut in acting. Now I’m ready for the 2020s decade to be full of close calls, but never being selected for the top roles, especially those opposite Mahira Khan, Mehwish Hayat and Maya Ali,” the cricketer turned actor told The Dependent.

Fawad said his performance in Khudkash Muhabbat has ensured what lies ahead for him, which the 35-year-old says he is fully aware of.

“My performance in Khudkash Muhabbat is like the 168 against Sri Lanka on Test debut. I think this marks the start of the struggle. I might get a few opportunities in a different format – like I did in ODIs in 2014 – but I think I’ll struggle to get a web series for a long time. But of course this also means that hopefully after a decade I’ll cement my place in this format,” Fawad maintained.

The middle-order batsman said knowing what lies in store will give him confidence to know what he has to do.

“I’ll have to keep performing at the grassroots level, at the domestic stage, and then eventually the break will. It will be a struggle, but I will definitely work with Mahira, Mehwish and Maya one day,” he said.

At press time, an emergency meeting called by The Dependent mulled over using #FaadiKoCastKaroBC over the next decade, with the possibility of continuing with #FaadiKoKhilaoBC also there for the upcoming nationwide movement to help Fawad Alam get selected for the roles he merits.