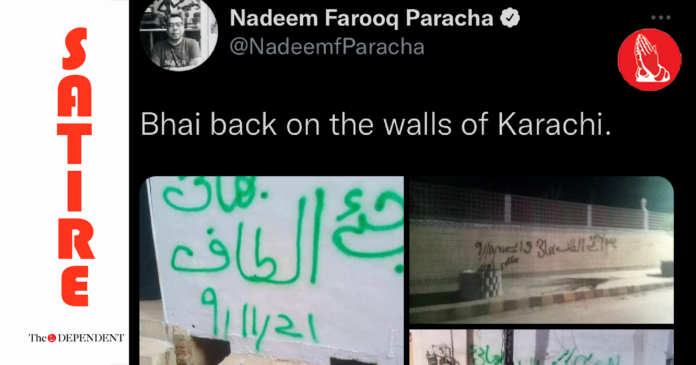 Noted social butterfly Nadeem Farooq Paracha tweeted on Friday that the chief of the London faction of the MQM, Altaf Hussein, was back on the walls of Karachi. He tweeted the image after graffitiing said message on a wall.

“The people of Karachi have spoken,” said a visibly aroused Paracha. “This wall chalking is as good as a free and fair election, if you think about it, the sort which used to elect the Muttahida from almost all constituencies with 130% turnout.”

“Finally, after what seemed like an eternity, the people of Karachi will have a party that believes in service delivery at their doorsteps,” he said. “Specifically, the AP boys making sure everyone gets their CNIC cards back after taking them a week before the polls.”

“Now, I can only hope this is because the military, the only true professional institution of this country, and the only one that can rid us of religious militancy, is going to forget its differences with the MQM and join forces with it to eradicate Taliban out of the city,” he said. “And they should both first start with eradicating the anti-Taliban forces out of the city.”

- Advertisement -
Facebook
Twitter
Linkedin
WhatsApp
Email
Previous articleShoaib Malik to do next bold photoshoot with Maulana Tahir Ashrafi
Next articlePPP ready to be opposition to govt after being successful opposition to opposition: Bilawal