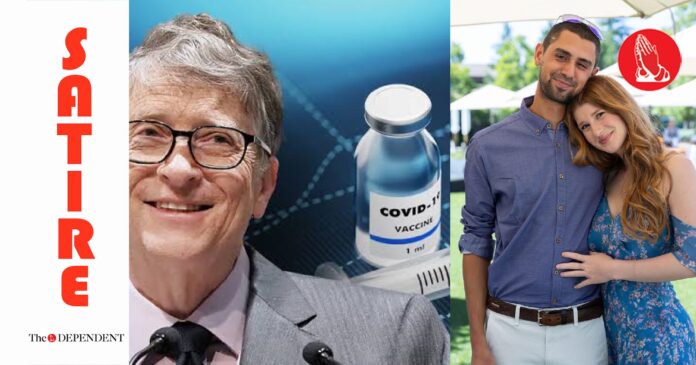 NORTH SALEM – Microsoft cofounder and philanthropist Bill Gates has confirmed that he personally created the ‘hoax pandemic’ just so he could install a tracking chip in his son-in-law.

Talking exclusively with The Dependent hours after nuptials of daughter Jennifer Gates with fully vaccinated Egyptian millionaire Nayel Nassar in the backyard of the household’s 142-acre property, Gates said those accusing him of creating coronavirus were ‘right all along’.

“Yes, I did it. But only because I had my daughter’s best interests at heart. Vaccinating billions of people around the world just to vaccinate one particular person is not only a small price to pay, but also the perfect cover,” Gates said.

The Microsoft cofounder further elaborated that before everyone else put two and two together he wanted to confess the details to the world’s number one publication, ie The Dependent minutes after the wedding ceremony culminated.

Gates said that once he knew that his daughter was getting married he simply had to install a chip in her husband to keep track of him.

“The timeline would have given it away – they got engaged last year, and they got together before that, basically overlapping with how covid-19 unfolded. So I might as well tell you the whole truth myself,” he added.

“My son-in-law will now forever be monitored through Windows devices — the vaccination chip also works on iOS and Android by the way – and that way I would be able to keep an eye on him, along with a few billion others.”