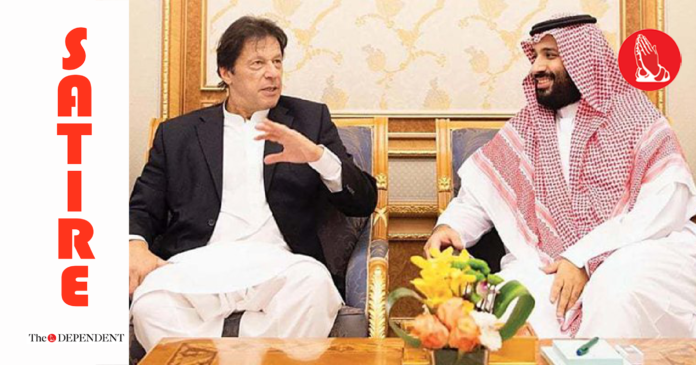 ISLAMABAD/RIYADH – The government’s world class team of financial wizards has finally come up with a foolproof plan to halt the escalating inflation, which would only necessitate a funding worth $78 billion per year, Prime Minister Imran Khan informed Saudi Crown Prince Mohammed bin Salman on Sunday.

Sources privy to the phone call between the two leaders confirm that PM Khan conveyed the plan to MBS, which would require Saudi Arabia to pay a mere $156 billion over the next two years, to ensure that the rupee remains stable.

“After ingenious calculations and unprecedented strategy formulation, we can conclusively reveal that the $3 billion you gave in safe deposits at the end of October helped us keep the rupee afloat at around Rs170 per US dollar for around a fortnight. So my government just needs another $156 billion,” Khan said during the call, which sources in Riyadh claim the Pakistani premier had with the Saudi crown prince’s voicemail.

“Our strategy is absolutely nothing like you’ve ever seen. After spending much time — the entirety of this fortnight in fact — my team came to the conclusion that his means we would need $78 billion per year to stabilise the rupee and control inflation in the country,” the PM’s said in the high level diplomatic talks with MBS’s mailbox.

“You see MBS, this was not an easy task. First of all you need to know there are 14 days in a fortnight, and 7 days in a week. You also need to know that there are 52 weeks in a year. So it’s not simple math, you require a mathematical genius to first divide $3 billion by two and then multiply by 52,” the PM continued sharing the through groundwork put in place before the proposal was made.

“And even that would only give you the amount needed for one year. For two years, as in till the end of the PTI tenure, you have to multiply it by two. Hammad divided $3 billion by two and multiplied it with two, while Shaukat was tasked with doubling the number that Hammad got. This is the level of teamwork you get when I am leading from the front,” he further added, paying tribute to adviser on finance and revenue Shaukat Tarin and Energy Minister Hammad Azhar.

The PM then explained to the Saudi crown prince’s mailbox that the kingdom would also be required to send $78 billion in oil supplies on deferred payments for the next two years.

“This I calculated myself by dividing 1.5 by 3 and then multiplying the number by 156,” the PM boasted in his message.

“Now [Federal Minister for Planning, Development & Reforms] Asad Umar has been tasked with multiplying the number by two before the end of this week.”

- Advertisement -
Facebook
Twitter
Linkedin
WhatsApp
Email
Previous articlePut me out of my misery once and for all, says Hammad to Shahzeb while handing him Glock
Next articleProgressive Saudi Arabia allows women to kick football without mehram’s permission