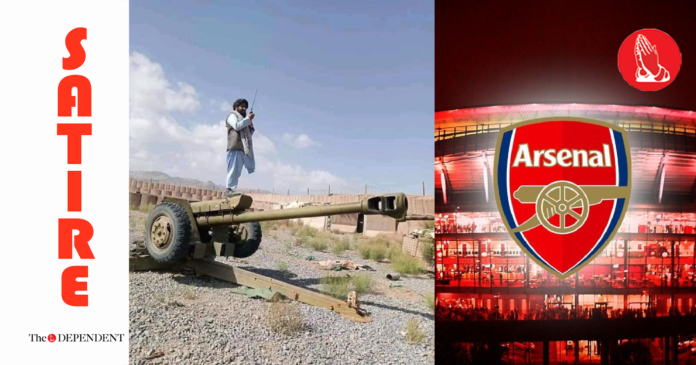 KABUL – UK officials who travelled to Afghanistan to meet senior Taliban members last week have confirmed that the Taliban have offered to purchase an English Premier League club in exchange for British recognition of the Taliban government, diplomatic sources have informed The Dependent.

British government sources said the officials discussed with the Taliban how the UK could help address the crisis in Afghanistan, in response to which the Taliban tabled the offer of a three-club shortlist.

“Arsenal lead the three-club list. In fact, the other two names were a formality, and the Taliban have their eyes set on buying Arsenal Football Club,” a senior diplomat informed The Dependent.

Sources within the Taliban confirm that the group is looking forward to working with Mikel Arteta, both at Arsenal and the Islamic Emirate of Afghanistan.

“We too want to learn from his experience of cluelessness and not knowing the basics of the responsibility and the job that we’ve landed upon,” a Taliban official said while talking to The Dependent.

“But we also want to learn how to deliver better results as he has in the weeks since the crisis in Kabul overlapped with the crisis at the Emirates Stadium in mid-August.”

The Taliban have further confirmed that they’re already in talks with legendary Arsenal manager, Arsene Wenger, who is currently in charge of global development at FIFA and has been signed by Saudi Arabia as the coach for al-Hilal and al-Nasr as the Saudi clubs prepare for matches against Paris Saint-Germain.

“We want to learn from Wenger how to spend less money, but also to try solve problems that we create ourselves, even if with a mixed success rate,” another senior Taliban official told The Dependent.

Meanwhile, British government officials confirm that after the Taliban they hope to see bids for Premier League clubs from Isis and al-Qaeda as well.

“Let’s merge the two most profitable brands of the 21st century: jihad and the Premier League,” said a senior British official.

- Advertisement -
Facebook
Twitter
Linkedin
WhatsApp
Email
Previous articleFinal decision to be taken by leader with actual authority, nation reassured
Next articleImran Khan should stick to being the Nawaz Sharif of 80s: Maryam