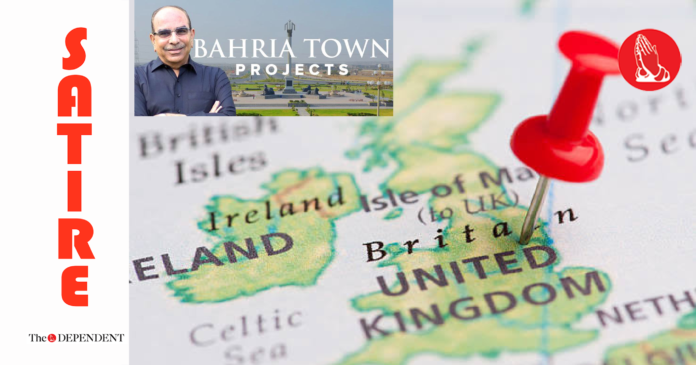 The announcement was made after Bahria Town Karachi (BTK), a privately owned gated housing society covering 68 square kilometers off the M-9 Motorway northeast of Pakistan’s coastal town Karachi, took over the United Kingdom.

Critics are dubbing the takeover of United Kingdom, described by real estate analysts as ‘a 242,495 square kilometer locality of posh housing and exotic facilities’, as the latest land grabbing manoeuvre of BTK, which on Tuesday morning unveiled its BTUK office, inaugurated by Bahria Town founder Malik Riaz.

Riaz, however, maintains that the establishment of the United Kingdom of Great Bahria Town, does not break any local or international laws.

“Not any more than the British empire between 16th and 20thcenturies,” said the Bahria Town founder Malik Riaz, who on Tuesday took over as the sovereign and the head of state of the Great Bahria Town.

Talking exclusively with The Dependent Riaz said that he would provide the residents of the United Kingdom of Great Bahria Town everything that they haven’t had access to.

“Such as history books not written by their ancestors,” Riaz said, confirming that residents would be charged for a monthly supply of such books in the maintenance bill.

When asked if he believed Bahria Town’s usurpation of former Great Britain counted as an imperialistic action, Riaz strongly replied in the negative.

“Not at all, I know colonialism when I see it!” he exclaimed, further unbuttoning his dress shirt to reveal a Che Guevara T-shirt, while talking to this scribe.

While Riaz has made his allegiance towards anti-colonialism clear, first by undoing Great Britain, and then by wearing revolutionary merchandise, leading thinkers of the left based out of what is now the United Kingdom of Bahria Town are looking to move out, fearing they might no longer have similar freedom to critique the United Kingdom.