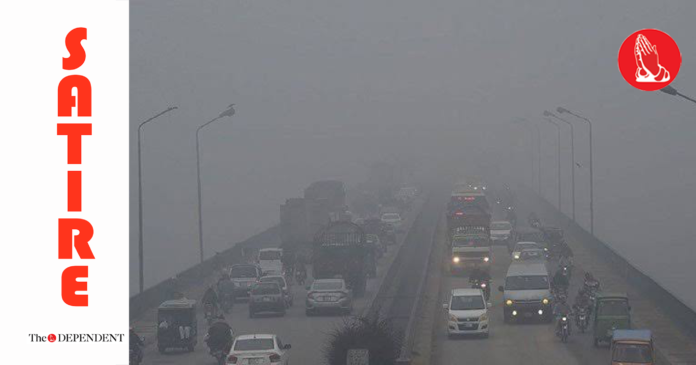 The Punjab government, having so far failed to address the toxic air quality in Lahore due, has decided to tax excessive breathing to combat smog related illnesses. The decision was taken during an emergency high-level meeting of health experts called by Chief Minister Usman Buzdar a thick layer of smog restricted his government-sanctioned private jet to takeoff, forcing him to take a ground level view of the situation on-ground in his province rather than the daily aerial assessment he makes.

“This could not be the worst time for another health crisis to breakout. We are currently in the final stages of negotiations with the banned Aedes aegypti group for a cease-bite agreement to curb the spread of dengue”, Punjab government spokesperson Hassan Khawar commented.

Speaking on the occasion of a crop-burning event arranged by Punjab Agriculture Department and sponsored by PSO and TOTAL PARCO, Finance Minister Punjab Makhdoom HashimJawan Bakht said that the new tax would generate much-needed revenue that would be directed towards investment in ‘anti-smog infrastructure.’

When asked to expand on the idea of ‘anti-smog infrastructure’financed by taxing breathing, Mr Bakht replied, “I know it’s brilliant. It’s a breath of fresh air when such ideas come to fruition”