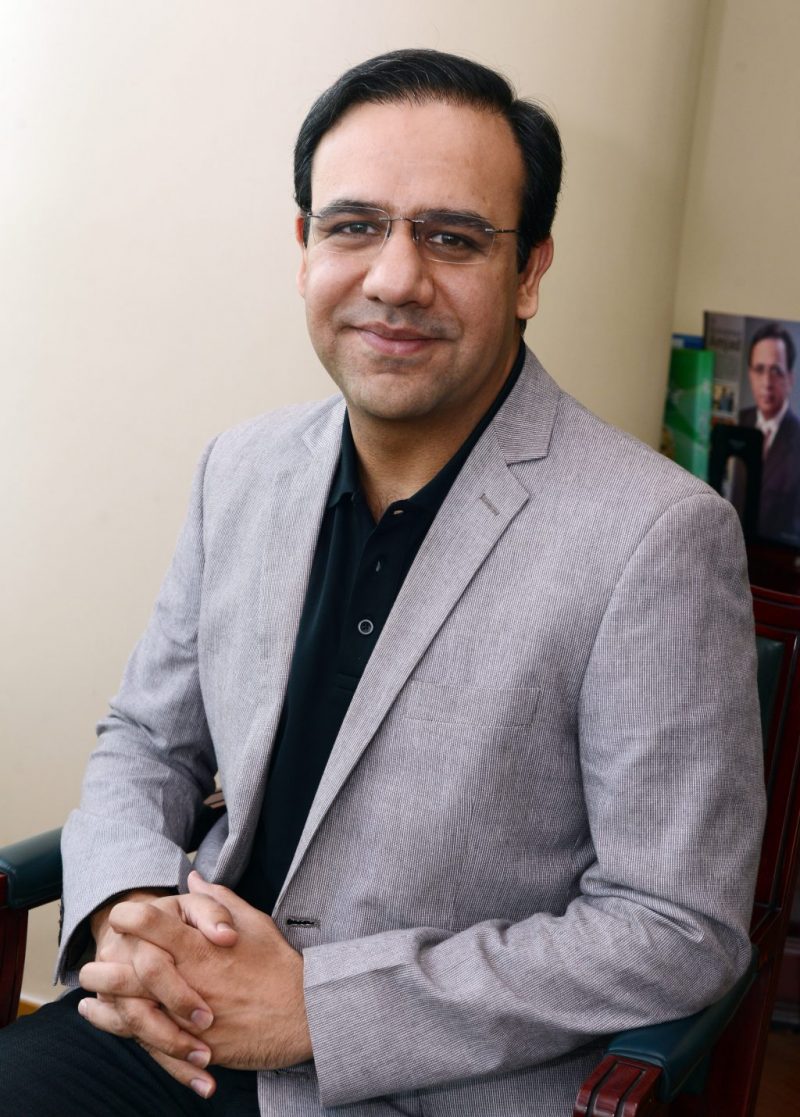 Umar Saif was only 23 when he completed his PhD from the University of Cambridge. A year later, in 2002, he finished his post-doctorate from Massachusetts Institute of Technology (MIT), in the United States (US), though he stayed put there for four more years before moving back to Pakistan in 2005. Upon his return, he joined his alma mater, Lahore University of Management Sciences (LUMS), to pursue his passion for computer sciences and teaching. During his time as an aspiring academic, Umar was one of the handful of professors who enjoyed the perks of a tenured appointment.

After half a dozen years at LUMS, in 2011 Umar was eligible for a year-long fully paid sabbatical. Having recently won a Google faculty research award, the timing seemed perfect for a break. Excited what the future held for him, he planned to spend the year in the US, working on a project along with some professors from UC Berkeley. Destiny, however, had other plans. At that very time, the MIT Technology Review included him among the top 35 young innovators in the world, making him the first Pakistani to be named on that list.

It was sometime in 2011 that having noticed of Umar’s nomination, the then Punjab chief minister Shehbaz Sharif invited Umar to a breakfast meeting over the weekend. Like many of us, he initially dismissed the call as a hoax while it took several more phone calls from the officials at the CM’s office, to ensure his presence at the breakfast table.

When Umar showed, the former chief minister put an offer on the table, which only a person of Umar’s calibre would consider to refuse. Fortuitously, Jawaid Ghani, a fellow professor at LUMS who was at that time serving as Punjab Information Technology Board’s (PITB) Chairman, also happened to be present at the breakfast table. Jawaid planned to leave for a year to focus on tableegh (voluntary preaching), and he had suggested Umar’s name to Shehbaz as his replacement during his absence.

At first, Umar was reluctant. Accepting the offer to head PITB meant putting all that he had planned on hold. And on top of that, he was susceptible that his fast-paced nature would not fit well inside the slow-moving public sector system that the state had to offer. “When I was offered the position, I was very conflicted. My conscience told me that I had a chance to improve things in the country that I had always felt needed fixing. I felt like a hypocrite, not accepting the offer,” says Umar, during a conversation with Profit.

However, after repeated assurances from the other two men at the table and after Shehbaz agreed to help him set up an Information Technology (IT) university, Umar finally accepted to head PITB.

Today, after almost seven years in office, Umar has survived two possible attempts at his life and has headed a digital revolution in Punjab that is being replicated by other provinces and in some cases even by other countries.

Now, our readers might be wondering why Profit, a business magazine, chose to cover an individual heading a public sector organization focusing on public policy reforms. The answer is simple, the projects he has undertaken have been in most cases economically relevant, and their economic impact has been nothing short of substantial.

Under his leadership, PITB has grown in size from an organisation employing 100 people in 2011 to a team of around 1,000 people today. The ‘public sector organisation’ has since completed and delivered over 240 IT projects in Punjab alone that include but are not limited to the digitisation of land records, police records and court records, implementation of digital solutions in education and healthcare sectors and encouraging the growth of hundreds of new tech-based companies and startups.

From MIT to ITU

During his time at MIT, Umar Saif always envisioned building a purely IT-centric university back in Pakistan. It was a near impossible task for a lone ranger and needed the support of various stakeholders, but as luck might have it, being the PITB chairman and working directly under the former chief minister Shehbaz Sharif who also at the time wanted to build a university, helped.

Information Technology University (ITU) charter was finally passed in March 2013, and Umar became its founding Vice-Chancellor (VC) at the age of 34, making him the youngest VC at the time. The University, with an accomplished faculty of around 100, presently has 1,200 students enrolled in its different programmes.

“This year we have had 25,000 applicants for our undergraduate programmes, out of which only 251 were accepted, so that is a 1% acceptance rate. Currently, we are directly competing with NUST (National University of Sciences and Technology) and LUMS,” claims Umar.

Ask anyone in Punjab, and they will tell you that being a patwari is one of the most infamous jobs in these parts. The reason being the sheer extent of corruption these keepers of land ownership records allegedly commit. In fact, the word patwari has become so disreputable that it is used as a taunt for the supporters of a certain political party due to the alleged financial corruption of their leaders.

“In a computer system you can only put in 100 per cent of the land. You cannot put 105 per cent because that 5 per cent land does not exist. Before the land records were digitised people had claimed ownership of more land than the land that actually existed. So that had to be settled,” says Umar, putting the patwari problem into perspective.

Umar explains that digitising land records will do two things in Punjab, first it will help pinpoint, if not solve, the problem of land grabbing and illegal encroachments, and second; it will help streamline and make the process of property tax payments transparent.

“The American economy moves by basically changing half a percent of the mortgage rate, up or down, since land being the basic asset is liquid. You can do business on it, you can borrow against it, you can lease a car, you can mortgage your house and so forth. However, in Pakistan, the basic land asset is illiquid.”

According to Umar, Pakistan needs to start treating land as a liquid asset rather than an illiquid one to enhance the liquidity within the economy and create further opportunities.

“As long as the government has a monopoly over any kind of a public record, they will be the extortionists. The entire world works on a self-filing system for taxes. Technology can enable you to ascertain what tax you need to pay, it can enable you to pay that electronically without involving a government agent and it can take that entire corrupt interface out of the equation. And then the government can get the figures audited by a third party. If adopted, the government tax collection will go through the roof.”

The final idea Umar has proposed regarding land records is to make all public records available to the general public in order to encourage a trend of whistleblowing. For example, if your neighbour owns a 5 kanal house, and pays disproportionately low tax, you can point it out. “The role for me is to come in, digitise the data and make it openly available and transparent for everyone,” he says.

The fight against the patwari system has not been without repercussions. In 2017, two weeks after a suicide bomber ‘accidentally’ blew himself up a few feet from PITB’s office in Lahore, Umar’s office at the eleventh floor of the same building was targeted by a sniper bullet. The PITB chairman at that time was in Dubai, and the intelligence agencies termed the bullet that hit a few inches away from Umar’s office chair in Lahore as a warning shot by his enemies.

Umar Saif might look like a public policy guy, but he still has his entrepreneurial spirit intact. His earliest entrepreneurial projects date back to his undergraduate days at LUMS where he worked on three startups from inside a small building that he called the ‘Saif Centre of Innovation’.

Pursuing his passion for entrepreneurship, Plan 9, situated at the ninth floor of the Arfa Karim Tower in Lahore, two floors below Umar’s office, was set up as one of the first full-service incubator in Pakistan, aimed at facilitating young tech-based entrepreneurs in setting up their companies. Till date, more than 160 companies, including the likes of Patari and Mangobazz, with a collective valuation of $70 million have graduated from Plan 9. So successful has the startup incubator model proved to be, that today there are replica incubators all over Pakistan, emulating the Plan 9 model.

However, Umar still feels that there are still some questions that the federal government needs to ask itself. “The government needs to figure out if it wants venture capital to come into Pakistan. If the answer is yes then it needs to ask the SECP (Securities and Exchange Commission of Pakistan) to make it easy for venture funds to be established in the country,” he says.

“Around the world, 2% of pension funds invest into technology mutual funds. The government needs to talk to funds like EOBI (Employees Old-Age Benefits Institution) and other pension funds, to divert a fraction of the money into tech funds.”

“They have to also talk to the PSX (Pakistan Stock Exchange) regarding the possibility of having small tech IPOs (Initial Public Offering). Why cannot Patari go and list itself on the PSX, if Facebook can get listed in the US.”

During the 2018 election campaign, Pakistan Tehreek-e-Insaf (PTI) manifesto included the creation of 10 million jobs in the next five years, a promise that seemed well over the top to even the most ardent supporters of the political party. However, PITB might be PTI’s answer to achieving the seemingly unachievable.

A large proportion of Pakistan’s IT industry still remains undocumented, an aspect of it being the huge number of freelancers in the country. According to some estimates, Pakistani freelancers collectively earn around $1billion a year, with Pakistan’s freelancing industry being the third largest in the world after the US and the UK. PITB’s e-rozgar centres train people to monetise the different skills that they possess. Umar seems optimistic that these centres can help PTI achieve its goal of providing 10 million jobs for the masses.

“We can easily train one million people through our e-rozgar scheme. If the kid makes $30 a day which is our goal, it collectively amounts to $30 million dollars a day and translates to Rs100,000 per kid a month. How many other government or private jobs offer Rs100,000 a month to fresh graduates? Out of those 10 million jobs, 10% could be IT related freelancers,” he holds forth.

However, he seems unsure about his own place on the table within the new system that has come in place after PTI won the July 25 elections.

“It is true that I worked very closely with Shehbaz Sharif. I was part of this team of four or five people that largely planned everything. I was close to him so some people might begrudge that,” he says.

“My last substantial job offer, of about $2.5 million a year was made to me five years ago, so in 5 years, my opportunity cost is close to $12.5 million. I could be doing many other things on the side too, like a startup or something else. Now, I have to figure out whether this is a conducive environment for me and more importantly will the new government like me. If it does not work out, I will probably do something else.”