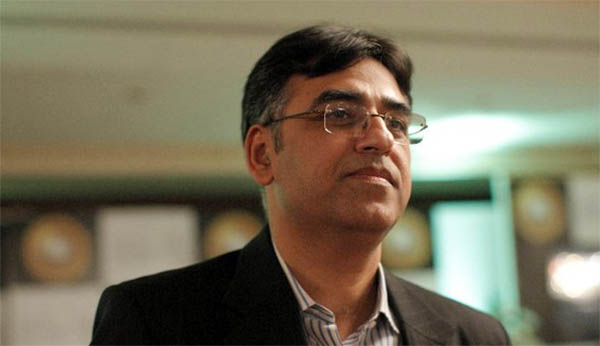 PESHAWAR: Finance Minister Asad Umar on Monday said that the country is close to reaching an agreement with the International Monetary Fund (IMF) in order to secure a financial assistance package.

The minister made the comments while making an address at the Sarhad Chamber of Commerce and Industries in Peshawar. The comments come a day after Prime Minister Imran Khan met with IMF chief Christine Lagarde on the sidelines of the World Government Summit in Dubai.

Umar explained that Pakistan and IMF had convergent views regarding the implementation of structural reforms and that an agreement was imminent.

“The deal will be [good for Pakistan] but it is the responsibility of the business and trading community to put Pakistan on the path towards progress,” said the finance minister, while adding that PM Imran had informed Lagarde that the country wishes to sign an agreement.

He said that Pakistan is also attempting to improve trade relations with neighbouring countries such as Iran and Afghanistan but added that trade ties with India could also improve if the Kashmir issue is resolved.

The finance minister also said that the country was also developing a Strategic Economic Draft to improve trade relations with Turkey.

Christine Lagarde on Sunday said it was ready to support Pakistan but reiterated decisive policies and a strong package of economic reforms need to be undertaken to restore the resilience of its economy.

She gave these remarks on the sidelines of her meeting with the Prime Minister Imran Khan at the World Government Summit in Dubai on Sunday.

The prime minister appreciated the IMF’s support to Pakistan and shared his vision for nation-building. He reiterated the government’s commitment to undertaking structural and governance reforms, and strengthening social protection in the country.

The IMF managing director acknowledged the steps taken so far by the Pakistan government for stabilising the economy and said the IMF will remain engaged in supporting Pakistan in sustaining its economic recovery.

While talking about her meeting with the PM, Lagarde said, “I had a good and constructive meeting with PM Imran, during which we discussed recent economic developments and prospects for Pakistan in the context of ongoing discussions toward an IMF-supported program.”

She added, “I reiterated that the IMF stands ready to support Pakistan. I also highlighted that decisive policies and a strong package of economic reforms would enable Pakistan to restore the resilience of its economy and lay the foundations for stronger and more inclusive growth.”

“As emphasised in the new government’s policy agenda, protecting the poor and strengthening governance are key priorities to improve people’s living standards in a sustainable manner,” said Ms Lagarde.

Information Minister Fawad Chaudhary earlier said the meeting “will give us a chance to understand the IMF views and we will be able to give our version to the IMF chief.”

He said the problem is not the IMF deal but the conditions attached to the deal. “We want a fair deal that can actually help Pakistan in the short term, without affecting our long-term economic goals,” Fawad said. “Pakistan wants an agreed bailout package with the world financial body, which would be the country’s second IMF bailout since 2013, and it will be a last economic package from IMF.”

In a speech at the summit on Sunday, Imran said the government faced a massive fiscal deficit when it took office last year and was making efforts to cut it, though international investors were already showing confidence.

On Saturday, it was reported the government had decided to take up to $6 billion loan from the International Monetary Fund (IMF) from the next fiscal year.

Sources told that the government’s economic team and the international lending organisation has reached an agreement in their recent communication. “IMF has agreed to give the loan on Pakistan’s conditions,” they claimed.