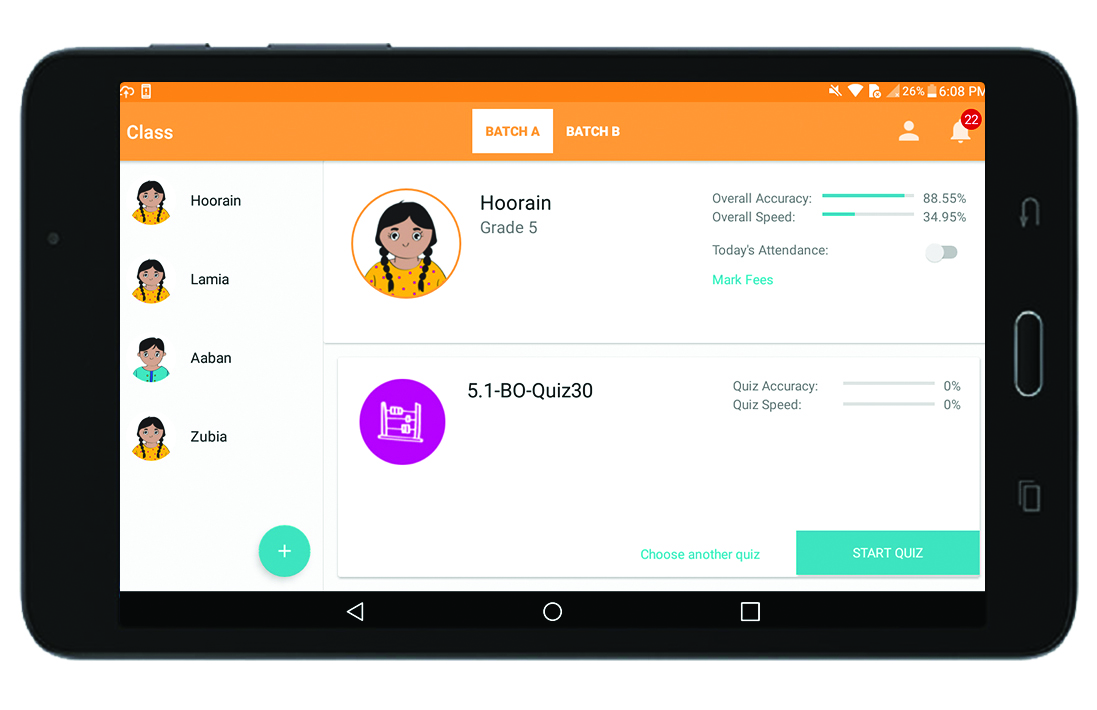 Ask any primary or lower secondary school student about the most difficult subject they have to study and, more often than not, the answer you will get is mathematics. Perhaps the earliest encounter most students have with the need for analytical thinking skills is our mathematics classes. Indeed, the foundation of most of pre-college education can be said to be mathematics for numeracy skills and English and/or other languages for literacy skills.

And so when Maheen Adamjee and Lina Ahmed decided to enter the edtech (education technology) space with their startup Dot & Line, they started with elementary level mathematics.

Dot & Line is a company that offers after-school mathematics lessons to students from grades two through seven, generally children who are between the ages of seven and 12. D&L’s business model relies on developing a proprietary curriculum for mathematics and training local teachers – primarily women – to teach mathematics using the company’s pedagogical techniques to small groups of students.

“There are half a million women in Pakistan who are highly educated, highly intelligent and highly capable,” explained Maheen, in an interview with Profit. “They apply to us through our digital recruitment portal and, if selected, go through training and get a certification. The selected teachers get a starter pack of course content which they can use to set up their home-based centers and cater to students within a one-mile radius.”

Both Maheen and Lina are highly educated young women who share a lot in common. Both have degrees from the London School of Economics (LSE), and both worked in other corporate and family business environments before making the pivot to education, something that was inspired by a big milestone in their personal lives: motherhood.

“Around the birth of my daughter was when I seriously started considering a change in career to education. And this came about also as a shared experience with my co-founder,” says Maheen.

Maheen worked at her family business in real estate development after graduating from college before moving on to a career in journalism, working for Dawn and Newsline before taking a break in her career around the time of her daughter’s birth. It was during that career interregnum that she began exploring ideas in education.

Lina worked for two years at the Acumen Fund as a consultant before moving to an education-focused nonprofit called the Reading Lab, which aims to improve literacy skills in children between the ages of four and nine. She felt that working at the Reading Lab was a more effective use of her time and skills than the higher-level consulting work she had done at her previous job, leading her to explore ideas about how else she could put her talents to use.

Both of them came together in March 2015 to create Dot & Line, seeking to create improvements in what they estimate is the $4 billion market for after-school tutoring in Pakistan. Both felt that there is tremendous innovation happening globally in education, but that most smart, talented people in Pakistan tend to stay away from the sector, which in turn means that the country as a whole misses out on the advances forward being undertaken in other countries.

“There is a ton of innovation in education,” says Maheen. “Things are fast-paced and people are seriously looking at the concept of personalised learning, systemic failures in the formal education market and how innovation is working towards bridging that gap and sparking curiosity and sharpening, logical thinking skills. They [people in other countries] are light years ahead of what is happening in Pakistan.”

It was that experience of comparing the educational opportunities in Pakistan for their own children to those available in other countries that came the idea of a program that focuses on curriculum, content, multi-sensory learning.

“We started off with mathematics because we felt it was the most misunderstood subject. A lot of children had math anxiety and a lot of them viewed it as a dry and boring subject,” says Maheen.

Dot & Line started off as an after-school program, but was originally meant to evolve into a formal schooling project, though that plan has since been abandoned.

D&L’s math program was originally a premium-priced service targeting the children of relatively affluent families who attend elite (and usually expensive) private schools in Karachi. However, as word about the efficacy of the program got around, the program started receiving queries from more middle class neighbourhoods in Pakistan’s financial capital: people who were interested in the results of the program but would find it difficult to afford the high prices.

It was in response to those queries that Maheen and Lina decided to take a step back and rethink their strategy, eventually revamping the program to make it more affordable to a larger segment of the population.

That was when the program expanded its scale a little and started marketing and pulling in teachers and students from all over Karachi. But even as they were opening up the program and making it more affordable, Maheen says they did not want to compromise on the quality of the learning experience.

For that to be the case, they would need to ensure that they were able to develop the most effective curriculum with the right set of pedagogical techniques. Dot & Line was able to get the help they needed through a London-based start-up accelerator called Spring, dedicated to investing in businesses that improve the lives of girls around the world, with a particular focus on Africa and South Asia.

That accelerator significantly helped Dot & Line with the resources they needed for curriculum development. “We’ve developed – through the help of PhDs, experienced teachers in mathematics, subject specialists, and educationalists – a mathematics program that is a combination of worksheets and technology, our application.”

Part of what makes Dot & Line’s methodology different – and in their view, better – is that it breaks down complex mathematic concepts into simpler components, allowing students to master each constituent concept more easily before moving on to the next one. It is this differentiated approach that Dot & Line believes is what makes them unique, and more effective compared to other after-school tutoring in mathematics.

“Mathematics, across schools, is taught in big chunks. So, what happens in schools is that you keep passing [your tests] even if you haven’t mastered it. And the learning gaps keep widening. And when you get into sixth or seventh grade, you realise that those gaps are so wide that now you’re seeking remedial attention and sometimes it’s very difficult to really bridge that big foundational understanding in mathematics,” explains Maheen.

And even if a student or their parents are cognisant of that gap, it is difficult to find the help one needs to fill them. Nearly all after-school tutoring in Pakistan is focused on either helping students with homework or, much more commonly, helping students master how to take tests and examinations. There is little emphasis, if any, on solidifying the students’ grasp of fundamental concepts in any subject, not just mathematics.

One of the two biggest ways Dot & Line seeks to distinguish itself from its competitors is by focusing on teaching concepts rather than to particular tests or homework. “What we do is we follow the micro-step approach which is actually a very fancy way of saying that we break up big concepts into smaller incremental levels of difficulty. So, let’s say a topic at school is taught in three parts. We taught it in seven or eight very small topics, but we start from a base understanding and then build up the difficulty.” This way, Maheen says, a student is mastering as they go along and not trying to catch up later.

The second distinguishing feature of Dot & Line is to help students apply concepts once they are done mastering them by posing questions, in plain language, that would require them to apply those concepts instead of just rote memorising techniques to apply to mathematics exercises and tests. In common parlance, this technique is called “word problems”, and it is the bane of existence of many, if not most, primary school students.

“It’s a literacy problem and it’s also a function of not understanding concepts properly so students can solve the numerical problem, but if you ask them to apply the concept, they struggle,” says Maheen.

Maheen and Lina began working on Dot & Line in 2015, and were able to start their first centers in August 2018. The program currently operates 73 centers in Karachi and Lahore, catering to over 300 students. Within the next month or so, the cofounders expect Dot & Line to grow to operating 100 centers.

Each center has at least one teacher, and each teacher can opt to teach up to four after-school sessions with an average of six to seven students per session. Each session is 90 minutes long, and students attend three sessions per week. The cost for the program is Rs4,000 per month. It is unclear how much of that revenue is kept by the teacher and how much by Dot & Line.

But as the business expands, it is becoming clear that Dot & Line’s bootstrapping days are over, even though both Maheen and Lina are grateful to have started off with their own capital.

Having said that, Dot & Line has recently raised an undisclosed amount in a seed funding round from Sarmayacar and is planning to use that to scale the program.

“Lina and I don’t look at investment at just cheques, but from the outset we made the commitment to ourselves to raise a partner and smart capital rather than just raise money which is why it took us some time to find the right partner,” says Maheen.

“I don’t think two people can build a company. So as important as our fantastic team is to us and hiring right, it was also important to find the right partner who believed in our vision and mission and our strategy and to be able to work with them and for them to add value into the company.”

Bernhard Klemen, partner at Sarmayacar, will join the board of Dot & Line. “Dot & Line offers a high-quality curriculum in the attractive and sizeable education space; we at Sarmayacar are convinced that the team headed by two exceptional female founders and supported by us will scale across Pakistan for supporting and fostering the young talent of the country,” says Klemen.

There are three core areas where Lina and Maheen plan to use the investment. One is to hire critical resources to add experience to the team which the founders are missing. The second area is to hire a high-level tech resources to scale the mobile application that is used by the teacher partners. And the third is to spend on marketing and expand the scale of the company.

The company also wants to expand its service line from mathematics to English literacy as well, a program which will also be focused on the needs on younger children.

And while Dot & Line does have a mission to improve education for as many students as possible, neither cofounder wants to portray the image of the company as one delivering a mass-market product. “Our prices are not low enough to target the lower income part of the economy. It’s very much a middle and upper-middle income play. It’s definitely not a mass-market product nor is it aimed as such,” said Maheen.

Pakistan’s Healthwire raises $700,000 from 47 Ventures in pre-Series A round