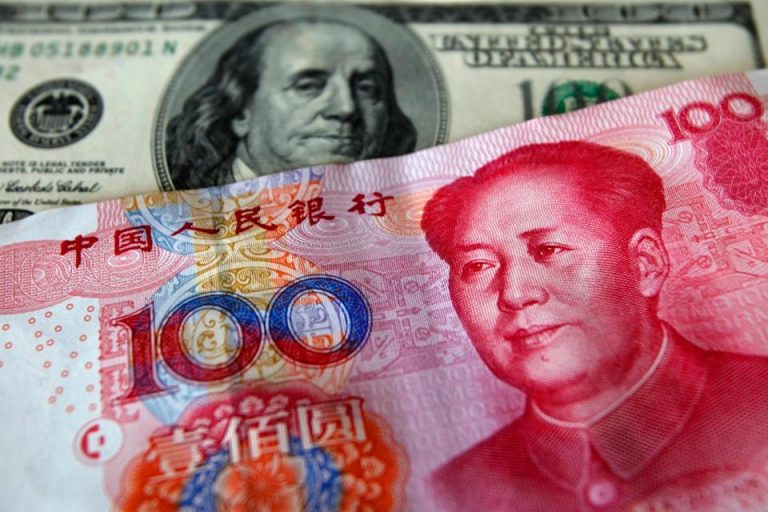 BEIJING: After a sharp sell-off, China’s yuan and stock markets attempted a modest recovery on Friday, yet investors were grappling with some of their worst losses in years as a bitter Sino-U.S. trade row threatened to ruffle the world’s second-biggest economy.

The yuan was set for its biggest monthly fall on record. Chinese stocks, on a downward spiral since late January, were also poised for their largest monthly slide since January 2016.

The downturn highlighted the anxiety among investors as Washington and Beijing showed no signs of backing down from their tariff dispute.

The worry is that an extended selloff in stocks and the yuan could spark a bout of capital outflows, putting further strain on the economy and complicating policy making as authorities put up defenses against the trade battle with the United States.

The yuan has shed more than 3 percent of its value against the dollar in June, its biggest fall since the market exchange rate was unified in 1994. On Friday, it fell to its lowest since mid-November 2017, but pulled up to 6.6139 per dollar by 0600 GMT for a modest bounce of about 0.16 percent on the day.

Offshore, where the yuan trades more freely, the unit was up by about a quarter of a percent, at 6.6224 per dollar.

In equities, the benchmark CSI300 Index rebounded more than 2 percent, while the Shanghai Composite Index gained around 2 percent, though they were both down around 9 percent for the month. In Hong Kong, the benchmark Hang Seng Index was also up more than 1 percent.

U.S. President Donald Trump has shaken the world trade order by seeking to renegotiate the terms of some of the United States’ trading relationships, in particular with China.

The U.S. is targeting $34 billion of Chinese goods for tariffs to take effect on July 6 and has threatened tens of billions of dollars more for similar duties.

“The central bank is expected to step up efforts to calm investors and slow the pace of the yuan depreciation that has sparked risk aversion across regional markets, including a possible reintroduction of the counter-cyclical factor,” Gao Qi, FX strategist at Scotiabank in Singapore, wrote in a note on Friday.

He expected “strong resistance” at 6.70 yuan per dollar.

In 2015, Chinese stock markets cratered and the authorities were widely blamed for a bungled rescue attempt.

Sectors and stocks that were exposed to the depreciating yuan have been hit hard this month.

Real estate was down 5.7 percent and poised for its fifth straight month of losses. The transport sector index, whose components include many leading airlines, tumbled 9.4 percent this month and was set for its steepest monthly drop since January 2016.

There has been signs of waning foreign interest in China A-shares.

Northbound flows in the cross-broader “stock connect” scheme linking Hong Kong and mainland markets last week saw its first weekly net outflows in three months and is on track to post another week of net selling this week.

Traders said the People’s Bank of China (PBOC) has set the daily midpoint stronger than models predicted in recent days and interpreted it as an attempt to warn the market of making a “one-way bet” on depreciation.

In May 2017, the PBOC added a secret “counter-cyclical factor” to its formula for calculating the midpoint, which helped put a floor under a falling yuan. It effectively removed the x-factor at the start of this year as the yuan rebounded.

The yuan has held up against other emerging market currencies in the region as well as a basket of currencies the authorities use to measure its value.

The trader said dollar demand was strong this week and could persist until July 6, when U.S. tariffs on Chinese goods are set to take effect.