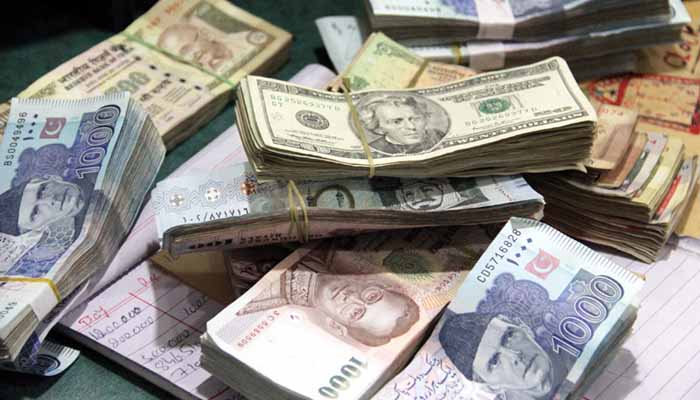 LAHORE: The US dollar shed a further 21 paisa against the rupee on Friday in the inter-bank market, falling to Rs127.90.

By mid-day on Friday, the Pakistan Stock Exchange (PSX) had gained a further 387.43 points to reach 42,476.59 points, consolidating the cumulative 1,624 point rise in Tuesday’s and Thursday’s session.

On Thursday, the rupee had appreciated by Rs1.10 per dollar a day after the elections that saw the Pakistan Stock Exchange surging by 750 points to close Thursday’s session at 42,089.16 points.

In a comment to Profit, market analyst Hammad Malik said “These are early signs of happiness and it is a technical positive correction in the value of the rupee.

Considering the fair value of the rupee is in the range of Rs125-126 to a dollar, buying spree in dollars and political/economic uncertainty caused the local currency to touch an all-time low of Rs130 against the greenback.”

Mr Hammad added, “And as buying pressure declined due to rupee touching a record-low of Rs130 against the dollar, demand lessened and trading in the greenback fell as people starting hoarding dollars in anticipation of another possible devaluation.”

These positive sentiments are driven by the leading party getting higher than expected seats where a strong govt at the centre is likely now. Expectations were of a weak government which would have had a tough task implementing the much-needed reforms.”

Since the interim government took reins, the rupee touched all-time lows against the greenback in the inter-bank and kerb market, following two rounds of devaluation in a span of last one month.

Arif Habib Limited’s Head of Research Samiullah Tariq while talking to Profit said “I think a reduction in political uncertainty is driving the appreciation of rupee against the dollar. Fundamentals haven’t changed yet, as the incoming government hasn’t taken charge.”

On Thursday, the dollar was trading at around Rs128.90 in the kerb market opposed to Rs130 just before the elections.

The currency market isn’t sure whether this stability would result in helping the exchange rate improve in favour of the rupee due to Pakistan’s issues on the external front.

Director Research Capital Stake Maha Jafer Butt said “The currency appreciation as well as the stock market rally seems to be a result of the smooth conclusion of the elections.

The fears and uncertainty around if the elections would be held and the formation of the government has almost faded.”

“Clarity is what has driven both, but not to forget economic challenges still remain there and decisions of the new government on that front will decide on the direction,” added Maha.

According to them, the atmosphere of uncertainty has been supplanted by hope for a better performance by the upcoming government.

On Thursday, the reserves held by the State Bank of Pakistan further plunged to $9.010.7 million, the lowest level in five years.

As the central bank reserves plunged, the rupee diminished in value against the dollar. However, the most damaging aspect has been the burgeoning current account deficit, which widened to $18 billion in FY18.

On a cumulative basis, the rupee has depreciated by around 14 percent this year and foreign exchange reserves touched their lowest ebb in the last four years.

During the last round of devaluation a week before the elections SBP said “the PKR-US$ exchange rate in the interbank market closed at PKR 128.0 per US$ against the closing level of PKR 121.55 per US$ of the previous day.

This movement in the exchange rates reflects the demand-supply gap of the foreign exchange in the interbank market.”

It added, “SBP is of the view that this adjustment in the exchange rate along with the increased policy rate and other administrative measures, would help contain domestic demand in general, and reduce the imbalances in the country’s external accounts in particular.”

From December 2017 till the middle of July this year, the rupee has been devalued in four rounds by the State Bank of Pakistan by around 21 percent to stimulate exports, which grew by around 14 percent to $23.228 billion in recently concluded FY18.

However, correspondingly imports skyrocketed to a record high of $60.898 billion, growing 15.10 percent and contributing to the trade deficit reaching $37.670 billion in FY18.

Also, Pakistan’s borrowing hit record highs during FY18 to $11.4 billion including a cash addition of $500 million by China’s State Administration of Foreign Exchange (SAFE), according to data of Ministry of Finance and Economic Affairs.