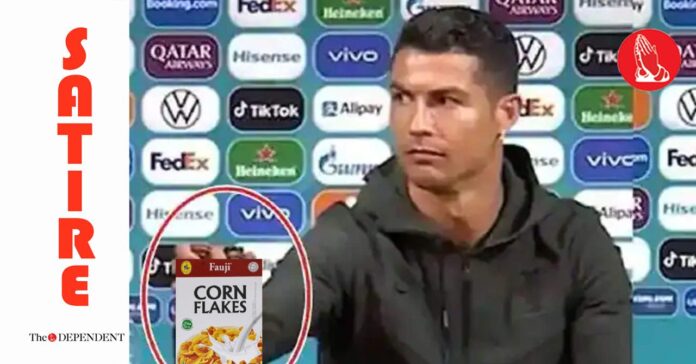 MUNICH/ISLAMABAD: Cristiano Ronaldo’s removal of a Fauji Cornflakes box during a press conference at the Euro 2020 football championship on Thursday has resulted in the Pakistan National Assembly being dissolved.
During the press conference aired on live TV, the Portuguese forward and captain was seen lifting the box and putting it aside, urging everyone to stop catering to Fauji.
“Fauji, blekkhhh…” exclaimed Ronaldo in the press conference leading up to Portugal’s next Group F clash against Germany following their 3-0 win against Hungary.
“Democracy!” the star footballer was seen and heard shouting, along with a punch in the air, after removing the Fauji boxes.
Moments after Ronaldo shunned Fauji, and asked fans to embrace democracy, a notification was issued in Islamabad with regards to the National Assembly’s dissolution.
The now defunct Ministry of Parliamentary Affairs issued the notification, reiterating that the snub by the Portuguese superstar has hit the brand supporting the National Assembly.
“The 15th National Assembly of Pakistan stands dissolved after its support system, the financial empire running it, took a massive hit during the ongoing Euro 2020. The next National Assembly will be formulated following the economic recovery of the empire,” read the notification.
After an emergency meeting in the General Headquarters, a retired general is expected to be named caretaker until Fauji Foundation recovers to select the next National Assembly.