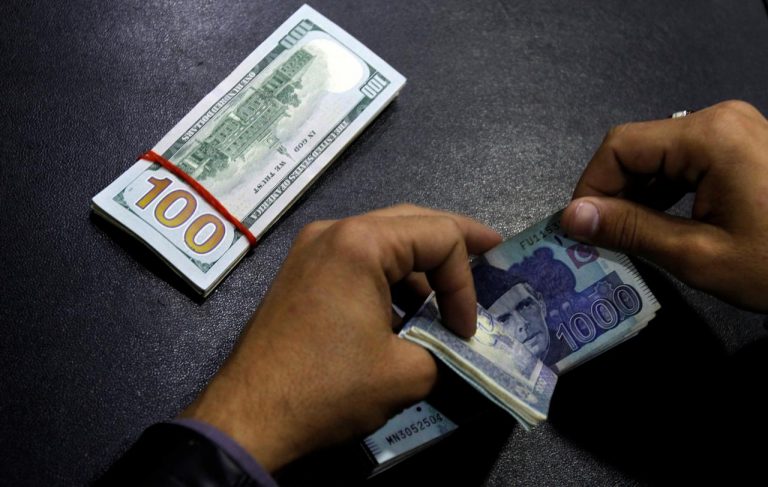 LAHORE: Analysts believe that the Pakistani rupee would remain stable against the US dollar in the foreseeable future as the economy faces challenges on multiple fronts.

The precarious financial situation can be gauged from the fact that the incumbent government has set aside Rs2.946 trillion for interest payments for holders of the national debt and in paying off the principal amounts in the upcoming financial year (FY) 2020-21.

Since the beginning of July 2017 till date, the rupee has depreciated by a whopping 55.6% and despite the high-growth rate of 5.8% touted by the PML-N in its last year in power set in motion a balance of payment (BoP) crisis of which busted the economy and which was largely inherited by the present administration.

In a nutshell, whether it is domestic, public and external debt, it goes on piling up as the debt burden touches unprecedented levels. Adding insult to injury are the low levels of foreign exchange reserves with the State Bank of Pakistan which would be barely enough to provide import cover of two to three months.

Debt servicing will constitute over two-fifth of the country’s overall budget outlay in the next FY21. Not only is the federal government cash strapped, but it also faces a challenge of high unemployment, an anaemic economy saddled with the stinging threat of rising coronavirus cases and then the locust threat that could decimate the food crops, cause food insecurity and leave the agriculture sector in limbo.

In the next FY21, the splurge on foreign debt servicing would amount to Rs315.135 billion and no amount will be spent on foreign loan repayment as shared by Minister for Industries and Production Hammad Azhar in the lower house of Parliament last week.

While speaking on the condition of anonymity, a financial analyst told Profit that there is a no prospect of an outright default for Pakistan because the level of private debt is not as much as to say in African countries.

Moreover, he elaborated that Pakistan’s debt is more multilateral and countries which are open to more negotiations. He explained that in the past few months Pakistan’s current account deficit has improved on the back of dropping imports which is again positive for external debt sustainability.

“Question remains on how quickly Europe opens and how virus progresses there for our export pipeline to materialise. Especially on apparel side given people’s demand for “going-out” clothes dampen with less social activities,” he concluded.

According to Uzair Younus, a Non-Resident Senior Fellow at The Atlantic Council in Washington D.C, “The SBP is committed to a market-determined exchange rate, so one expects that change in export earnings, remittance flows, and debt repayments will be reflected in the change in the value of the currency.”

“The economy will continue to remain weak – COVID-19 and the locust attacks have created a perfect storm and a more proactive fiscal strategy is needed to deal with the economic fallout. Food security may become an issue – only last year we say over 30% inflation for perishable food items – and the government must be more proactive in dealing with this evolving crisis,” he concluded.

However, Chief Global Market Strategist AxiTrader, Stephen Innes told Profit, “The narrative is not overly confusion as traders continue to fret about the doomy and gloomy economic knock-on effects from further lockdown restrictions.

The WHO last week doubled down on local authorities to reimpose proximity lockdown measures. The market does not know which way to run as Imran Khan policy is a double-edged sword as his government has resisted calls for a stricter lockdown with over the short term are good.”

“But it is fear that drives the economy. Falling infection rates have provided investors with the confidence that the lockdown approach was working, allowing equity investors to look forward to 2021 as impressive monetary and fiscal policy provide a post-pandemic bridge,” said Innes.

However, Innes believes that one good thing for the rupee is that the US Fed is doing everything they can to weaken the US dollar and provide the global market will a lot of US dollars.

While Pakistan does not have swap lines with the Fed, they still benefit by proximity via liquidity from regional peers, said Innes.

Moreover, he explained, “That the debt to GDP ratio is always a huge problem given the ever-increasing mountain of debt that gets exacerbated even more by the stronger US dollar, given that much of the external debt is in USD denominated instrument. It costs more to service that debt

“The remittance issue with many Pakistani foreign workers furloughed in the Middle East is a huge issue,” said Innes.

“And with crucial export sectors just starting to recover as much of Pakistan exports are destined for some of the most affected countries by the lockdown and those economies are just beginning to emerge from lockdown, there is not a lot of dollar coming in to SWAP back to rupee perhaps causing some hoarding of US dollar fearing a more significant fall in the rupee,” he opined.

However, Arsalan Soomro, Managing Director at KASB Securities observed, “In a “market” based exchange rate, we have to see the demand and supply equation. The supply side, remittances have been hit but the decline would be 10-15% at best given the informal sources of remittances remaining alive.”

“Similarly, the exports would resume activity once our export markets – EU and the US – pick up. In short, that is contingent on effective and safe vaccines. For regulators, letting currency depreciation would not materially increase exports and create more problems than solving those, said Mr Soomro.

“Likewise, the FY21 inflation forecast of 6.5% is unachievable if currency plummets or sees aggressive pressures. Since the tax targets were ambitious, we are certain that we want to remain within IMF holds. That keeps multilateral and bilateral loans pouring in. Hence, I would not expect “disorderly” movements in the currency,” he added.

“On the demand side, falling oil prices are saving us some dollar outflows for sure. And the reduced consumptions activity in the country also would keep demand for imported – elastic luxury and inelastic industrial demand – in check,” said Mr Soomro.

“The imports would not be too much of a worry for the next couple of months. However, I expect after normalisation the currency pressure could rise if non-oil imports rise in double digits because of low-interest rates. Then the risks could emerge warranting questions on monetary easing. Doves can turn hawks then,” he shared.

“With most of the SCRA-led money out of the system from foreign investors, I feel IMF disbursement of tranche money followed up with ADB and WB lending would bring FX reserves back in the upward trajectory.

So, in the short term, I do not expect the currency to go closer to Rs 170. However, by December I would not be surprised but that too is 4% in relative terms. Our country can afford to live with 4-5% depreciation provided the GDP is in sustainable expansionary mode,” he concluded.