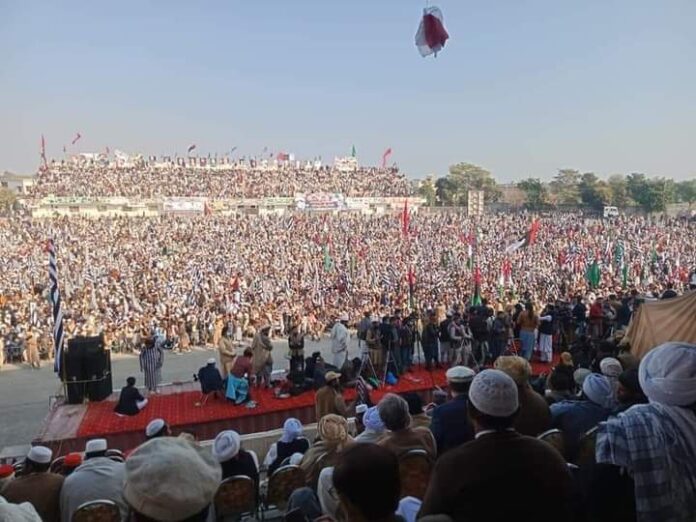 Pakistan Democratic Movement (PDM) President Fazlur Rehman, during the Bannu rally of the anti-government coalition, accused the ruling party of having “ruined” peace and the country’s economy.

“Claims were made that we have defeated terrorism, that there is peace in the country now,” said the PDM president, in reference to the recent attacks on the Hazara community.

“We stand with the Hazara community,” he said.

The JUI-F chief asked the crowd why there were still armed forces present in the tribal areas if terrorism had been eliminated. He further stressed that the armed forces were not the only ones making sacrifices.

“I say if the armed forces have given sacrifices against terrorism, then we have too and so has the nation,” Fazl said.

He claimed that the army had been purposefully dispersed through Balochistan, and added that peace could not be established until the military was withdrawn from civilian areas.

Fazl claimed that the opposition was showing a true path towards peace and democracy, adding that it was trying to show Pakistan “as an Islamic state”.

The JUI-F chief said that the PDM would protest outside the Election Commission of Pakistan (ECP) in Islamabad, on January 19, and that it would also begin its anti-Israel ‘million march’ in Karachi on January 21.

He commended those that had come to the rally for “revolting against Prime Minister Imran Khan and his government”. Fazl said that anyone who is “sincere to PM Khan is a traitor.”

“We will make sure that this puppet government drowns in the sea,” he said.

Representing the PML-N, Ahsan Iqbal took shots at the incumbent government over the poor economy and the hardships faced by the public.

“If our government wasn’t robbed in 2018 and with Maulana Fazlur Rehman sahib being a part of the government, then CPEC [China-Pakistan Economic Corridor] would today be producing hundreds of thousands of jobs,” he claimed.

Furthermore, he said that the credit of CPEC goes to Nawaz Sharif’s tenure and that the previous prime minister had started the $46 billion project when no one would bring a dollar into the country.

He added that there were fewer cases of suicide bombings and reduced loadshedding under the previous government.

“By bringing this inept and selected [prime minister], the economy that was growing by 5.75 per cent was thrown down to -0.4 per cent.”

“They do bargaining of benefit and loss even for people’s bodies. What do they know about humanity?” he said, adding that Pakistan had fallen behind its South Asian neighbours in economic growth.

“How much farther back do we have to go? Today we have to decide that the fate of Pakistan is not poverty, unemployment and injustice.”

Iqbal claimed the PM Imran had sent his special assistant to Balochistan instead of going himself as there was no benefit to the premier. “He could not be bothered to soothe their wounds because he was not elected but selected, and is now rejected,” he alleged.

Separately, Punjab Chief Minister Sardar Usman said that the PDM was merely trying to make every attempt possible to get an NRO-like concession, but insisted that such a thing would never happen as long as Prime Minister Imran Khan was in office.

He also expressed his satisfaction that the economy was recovering despite the coronavirus pandemic, adding that people needed development and prosperity.

The rally was held at the Ziad Akram Khan Durrani Sports Complex, despite the reservations of the Khyber Pakhtunkhwa (KP) Sports Department over the use of the venue as a public meeting.

A day earlier, the department in a letter had asked the Bannu administration to stop the PDM from holding the rally and had said that holding political gatherings and activities should be banned in the sports grounds of the district.

The PDM had switched from their previous venue of Lakki Gate in Bannu city but after it was expected that a larger number of people will take part in the rally.

Earlier in the day, Fazl had said that PM Imran had been forced the take a path of retreat.

“PDM’s rallies and meetings were hindered in Dera Ismail Khan, Multan and Lahore,” Fazal had asserted while speaking to media persons in Shorkot, Punjab, before leaving for Bannu, Khyber Pakhtunkhwa (KP).

“Local media was forced to misreport which was rejected by the international media,” he had said and had also ruled out differences among the PDM-constituent parties.

The JUI-F chief had said that the public mandate had been stolen and that the ‘fake’ assemblies would not be allowed to complete their terms.

In response to a question, Fazl had said that there is sufficient time to finalise a strategy for holding a long march towards Islamabad and tender resignations from the assemblies. “Our strategy has changed after consultations with our legal experts,” he pointed out.

“We are moving ahead under one strategy,” the JUI-F chief had said.

The first rally of the second phase of the PDM protests took place in Bahawalpur, where the PDM president had said that the 11-party alliance would stage a sit-in in front of the ECP headquarters in Islamabad in protest of the delays in the Pakistan Tehreek-e-Insaf (PTI) foreign funding case.

He had further claimed that the reason behind the delays was because the “largest chunk of money” for the incumbent government came from Israel. The PDM head had said that the alliance will continue to use it legal and constitutional right until the present government is removed from power.

Fazl had stressed that this country was a democracy and that without the “people’s consent”, they would not accept “anyone’s rule”.

“You cannot govern by stealing people’s vote. True representatives of the people are part of PDM,” he had said.

He had said that the PDM was struggling to bring true democracy to the country, and it would show its cards when the time was right. Fazl had taunted that the government would be left “wondering”.

The JUI-F chief, taunting PM Imran, had asked why the only change the country had seen was to the numerous cabinet reshuffle. Referring to the premier’s recent comments regarding learning how to lead after two years, Fazl had said that Imran should have learned before he took the position.

“These people do not deserve to rule,” he had stressed.

He had pointed out that now, people resorted to suicide and infanticide due to inflation, adding that the growth rate had been 5.5 per cent under former premier Nawaz’s rule.

Referring to the PTI as the “traders of Kashmir” on the occasion, he had accused them of having delayed the CPEC projects and of having pushed the economy into the negative.

He had further said that the “selected” premier had prayed for Modi’s success, and now India had revoked Article 370 and changed the status of Kashmir.

Fazl had also claimed that Iran had fallen in India’s camp and that Afghanistan did not wish to speak to PM Imran. He had maintained that all the countries in the region had progressed except for Pakistan.