No charges against Wisconsin officer who shot Black man 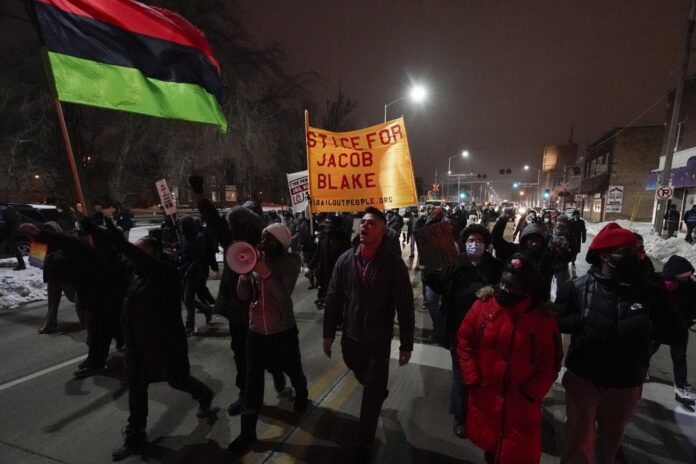 WASHINGTON: A Wisconsin prosecutor declined Tuesday to file charges against a white police officer who shot a Black man in the back in Kenosha, concluding he couldn’t disprove the officer’s contention that he acted in self-defense because he feared the man would stab him.

The decision, met with swift criticism from civil rights advocates and some public officials, threatened to reignite protests that rocked the city after the Aug. 23 shooting that left Jacob Blake paralysed. Gov. Tony Evers, a Democrat, called the decision “further evidence that our work is not done” and called for people to work together for equity.

Lt. Gov. Mandela Barnes, who is Black, was more pointed on Twitter: “I wish I could say that I’m shocked. It’s another instance in a string of misapplications of justice.”

I wish I could say that I’m shocked. It’s another instance in a string of misapplications of justice. It keeps happening, and there’s always a new excuse. The non-prosecuting DAs are as negligent as the officers in these situations. https://t.co/kJsXLzaqda

Kenosha County District Attorney Michael Graveley said investigators concluded Blake was carrying a knife when police responded to a report he was trying to steal a car. Officer Rusten Sheskey said he “feared Jacob Blake was going to stab him with the knife” as he tried to stop Blake from fleeing the scene.

“I do not believe the state […] would be able to prove that the privilege of self-defense is not available,” Graveley said.

The shooting of Blake, captured on bystander video, turned the nation’s spotlight on Wisconsin during a summer marked by protests over police brutality and racism. More than 250 people were arrested during protests in the days that followed, including then-17-year-old Kyle Rittenhouse, a self-styled medic with an assault rifle who is charged in the fatal shootings of two men and the wounding of a third.

“This is going to impact this city and this state and this nation for many years to come,” Justin Blake, an uncle, said. “Unless the people rise up and do what they’re supposed to do. This is a government for the people by the people, correct? We talk about this constitution everybody’s supposed to be so committed to, and yet we stand in the state that has the most convictions of African Americans in the United States. So they’re weighing heavy on one side of justice, but they’re allowing police officers to rain down terror on our communities. It’s unjust.”

Ben Crump, an attorney for Blake’s family, said in a statement the decision “further destroys trust in our justice system” and said he would proceed with a lawsuit. In a later tweet, he questioned whether Blake threatened Sheskey with a knife, saying “nowhere does the video footage show a knife extended and aimed to establish the requisite intent.”

A federal civil rights investigation into Blake’s shooting is still underway. Matthew Krueger, the US attorney for Wisconsin’s Eastern District, said the Department of Justice will make its own charging decision.

The Blake shooting happened three months after George Floyd died while being restrained by police officers in Minneapolis, a death that was captured on bystander video and sparked outrage and protests that spread across the United States and beyond. The galvanized Black Lives Matter movement put a spotlight on inequitable policing and became a fault line in politics, with President Donald Trump criticising protesters and aggressively pressing a law-and-order message that he sought to capitalise on in Wisconsin and other swing states.

Kenosha, a city of 100,000 on the Wisconsin-Illinois border about 60 miles north of Chicago, braced for renewed protests ahead of the charges, with concrete barricades and metal fencing surrounding the county courthouse, plywood protecting many businesses and the mayor granted the power to impose curfews. Evers activated 500 National Guard troops to assist.

As temperatures dipped near freezing Tuesday evening, about 20 protesters gathered and marched in an area north of downtown, chanting “No justice, no peace.” About 15 cars, some honking their horns, followed.

Vaun Mayer, a 33-year-old activist from Milwaukee who is Black, drove to Kenosha to protest. He said he didn’t expect the officer to be charged, calling Graveley’s decision just the latest in a line of prosecutors failing to charge police officers in Wisconsin.

“We’re used to this and we didn’t expect anything different than this,” he said.

At a downtown park near the courthouse where hundreds gathered in the days after Blake was shot, there was no sign of any large, organised protests. Abdullah Schabazz, 36, who said he came from nearby Waukegan, Illinois, to show solidarity with the Blake family, blamed the weather.

Kris Coleman, 36, of Kenosha, stood nearby live streaming National Guard troops manning an intersection. He said the city appeared to be better prepared than it was during the summer. “And I’m happy,” he said. Later, a small group of protesters confronted Guard members briefly at the courthouse.

Graveley told reporters during a two-hour presentation Tuesday afternoon that investigators determined that the events leading up to the shooting began when the mother of Blake’s children called the police and said Blake was about to drive off in her car. Officers determined en route that Blake had a felony warrant out for sexual assault.

They arrived to find Blake placing the couple’s three children in the back seat of the woman’s SUV. Graveley said officers had no choice but to arrest him since he was wanted. He said Blake resisted, fighting with the officers as they tried to handcuff him. Officers used a stun gun on him three times to no effect.

Noble Wray, a Black former police chief and a use-of-force expert who reviewed the investigation, said Blake had a knife that apparently fell to the ground during the struggle. Blake picked it up and officers disengaged and drew their guns. Blake then tried to get into the SUV, Wray said.

“Any officer worth their salt, they’re not going to let someone leave under these circumstances,” Wray said. “This is the stuff Amber Alerts are made of.”

Sheskey grabbed the back of Blake’s shirt, Graveley said. Blake turned and moved the knife toward Sheskey, the officer told investigators, leading him to believe his life was in danger, the district attorney said.

Sheskey fired seven times, hitting Blake in the back four times and in the side three times, leaving him paralysed from the waist down. Graveley said the shots in the sideshow Blake had twisted toward the officer.

Graveley showed reporters an enlarged photo of what he said was Blake’s knife, adding that Blake acknowledged to investigators he had it. The district attorney walked reporters through how he would have prosecuted the case, saying jurors would have had to put themselves in Sheskey’s position and that the officer’s self-defense claims would have held up given the circumstances of the case.

Jeffrey Cramer, a former federal prosecutor who has prosecuted officers, said Graveley presented a compelling case that showed why charges are not appropriate.

“There isn’t anyone who would like to be in that officer’s shoes — but at that moment, he used what I feel was a reasonable force to end the threat,” Cramer said. For those who disagree, he said, “What should he have done, let him drive away with a child in the back, let themselves get stabbed? […] The only answer reasonably is — they need to defend themselves.”

The officers were not equipped with body cameras.

Sheskey, 31, has been the subject of five internal investigations since he joined the Kenosha department in 2013, including three reprimands for crashing his squad car three times over three years. He has also earned 16 awards, letters or formal commendations, his personnel file shows.

Rittenhouse, who was among armed people who took to Kenosha streets during the violence and said he was there to help protect businesses, faces multiple charges including intentional homicide. Bystander video showed Rittenhouse shooting Joseph Rosenbaum and Anthony Huber and wounding a third man. Rittenhouse, who is white, has claimed the three men attacked him and he fired in self-defense. Conservatives across the country have been raising money for his legal team. Rittenhouse was 17 at the time of the shooting.

Rittenhouse pleaded not guilty to all charges at a hearing Tuesday.

Prosecutors dropped the sexual assault charge against Blake in November as part of the deal in which he pleaded guilty to two misdemeanor counts of disorderly conduct. He was sentenced to two years’ probation.