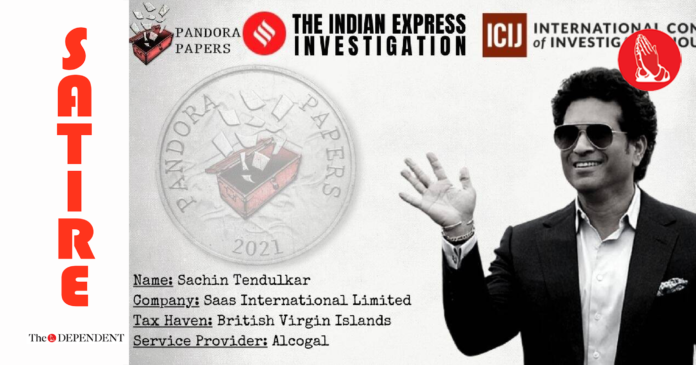 Tendulkar, former captain of India and considered one of the greatest batters of all time, has an offshore career where he has stashed 101 career centuries, according to the Pandora Papers,an International Consortium of Investigative Journalists’ (ICIJ) collaborative research on offshore holdings.

“Evidently, sportspersons have been setting up a plethora of offshore careers to project a degree of separation from their publically displayed careers,” the report said.

“By doing so, they create parallel careers overseas, outside the mainstream eye, which are often a contradiction of their known careers.”

According to the Pandora Papers, Tendulkar’s offshore career is filled with decisive knocks that provided his team much needed performances, even if it risked being costly to individual numbers and stats.

“Sportspersons who operate in such havens say they need offshore career to conduct their plays that allows them to risk individual numbers and stats. But these careers often amount to lower all-time tallies limiting the glory to the offshore teams that exist in a realm with low-personal glory jurisdictions,” the ICJ noted.

Sources within the ICIJ have informed The Dependent that a detailed exposé of athletes with contrasting offshore careers will soon be unveiled.

Sources confirm that sportspersons named in the list area some of the greatest players of all time, including tennis players who won a bulk of majors among lowest competition, footballerswith varyingly inflated goal tallies, basketball players who artificially boosted their assist or rebound numbers, and modern day cricketers with towering batting averages.