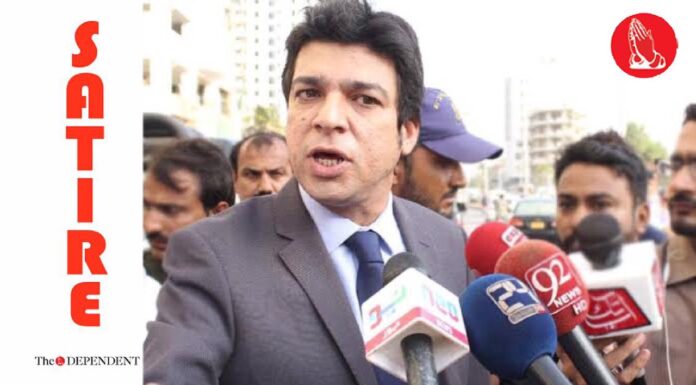 “It’s not my client’s fault that Covid-19 has slowed down the usually fast pace of work at the US embassy in Islamabad”, argued Hasnain Ali Chohan, associate to Mohammad bin Mohsin, who is representing Federal Minister of Water Resources Faisal Vawda as his lawyer, in front of the ECP, that is hearing a ‘disqualification on the basis of dual nationality’ petition against the PTI cabinet minister.
Mr Mohsin had explained in an application filed earlier with the ECP that Mr Vawda had been waiting for a passport renewal appointment at the US embassy for over two months and now that he finally got one, could not miss it.
The application went on to say that Mr Vawda has suffered immensely due to his expired US passport because, being a US citizen, he is eligible for a Covid-19 vaccination for which he has received multiple calls but has been unable to travel.
“This immense sacrifice in the line of duty and country in itself should be reason enough to dismiss the case altogether”, Mr Mohsin pleaded in the application, a copy of which is available with The Dependent.
Speaking to this scribe, a clearly perturbed Mr Vawda was complaining how the corrupt remnants of past governments such as the election commission were purposefully and vengefully looking for any reason to disqualify an elected minister and member of cabinet.
Mr Vawda was forced to postpone the interview half way through after getting a pick-up call for his passport from the US embassy at which point he told his PA to clear his schedule for the day, took out a midsized suitcase from under his office desk and proceeded to the diplomatic enclave on an official vehicle.

- Advertisement -
Facebook
Twitter
Linkedin
WhatsApp
Email
Previous articleWe should not be dragged onto high court premises, says legal fraternity
Next articleTottenham sign Hafeez on loan after being impressed with his golf skills