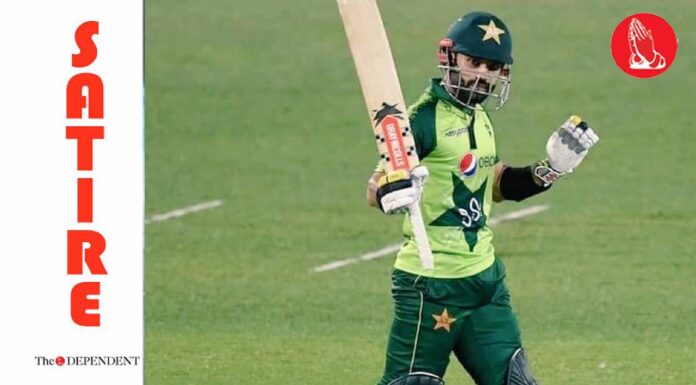 LAHORE – Transforming and yo-yoing between Mohammad Rizwan and himself, Sir Rizwan on Thursday confirmed himself as the greatest troll of the current cricketing generation.

The announcement was made during the first T20I between Pakistan and South Africa at the Gaddafi Stadium, as the hosts posted 169 batting first thanks in large part to a century scored jointly by Mohammad Rizwan and Sir Rizwan.

Sir Rizwan opened the batting for Pakistan and then transformed into Mohammad Rizwan 30 balls in. His highness then became only the second batsman in Pakistan’s history to score a T20I century, and becoming the only Pakistani batsman to hit seven sixes in a T20I innings.

Sir is now only the second Pakistani batsman to have scored a century in all three formats, days after hitting his maiden Test tonne in a match winning innings in the second Test against South Africa in Rawalpindi.

“As long as he was doing it in Test cricket we appreciated how talented this guy is in the five-day format. But a T20 century for Sir Rizwan? He’s clearly been trolling us all along!” said leading analyst and senior commentator Bazid Khan while talking to The Dependent.

Sir has now successfully trolled the cricket-know-it-all nation in all possible formats, with the nation confirming on Thursday that it’d be happy to be trolled in such a manner for a long time to come.

At press time, Sir had taken his place behind the wickets as Pakistan began their defence of 169 in the first T20I.