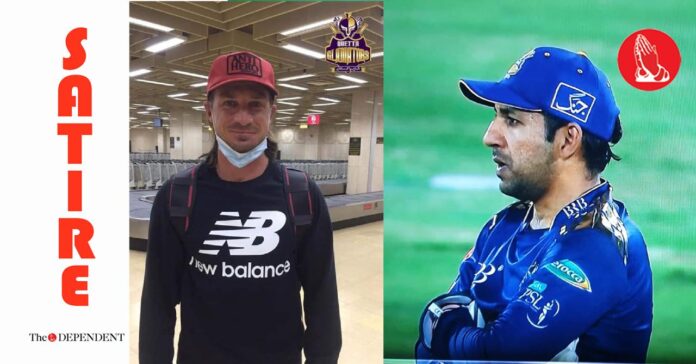 KARACHI – Leading from the front, without making any exceptions for any members of his squad, Quetta Gladiators skipper Sarfaraz Ahmed spent much of Monday night and Tuesday afternoon rehearsing how to say, ‘Idhar aao mere se baat karo’ to legendary South African fast bowler Dale Steyn.

Steyn, who joined the Gladiators squad on Monday, at the time of writing was yet to spend a training session with his captain Sarfaraz, who made the most of the time before the next game for Quetta making sure he continued to get the most out of his new teammate by giving him the same treatment that was meted out to the rest of the squad in Sunday’s defeat against Lahore Qalandars.

During the rehearsal Sarfaraz was also seen practicing the hand gestures that go with both the line he expects his premium fast bowler to bowl, and the expletives that accompany those cricketing instructions.

At press time, Gladiators coach Moin Khan had to come between Sarfaraz and the mirror as he looked to calm his skipper down ahead of the side’s next game against Peshawar Zalmi on Friday.

- Advertisement -
Facebook
Twitter
Linkedin
WhatsApp
Email
Previous articlePM was surprised when I informed him he was surprised when informed of rigging details in Daska: Mehr Bukhari exclusive
Next articleSri Lanka joining CPEC as important as Sri Lanka’s 1992 World Cup defeat to Pakistan: Imran

ISLAMABAD – A government parliamentarian who did not vote for the government candidate Hafeez Shaikh in Wednesday’s Senate election has reiterated that those government...
Read more
NATIONAL

Shehryar Afridi is an encyclopedia on the art of wasting Senate votes, says Ali Gilani

The ruling Pakistan Tehrik-e-Insaf has announced a dharna against the rigging in Wednesday’s senate elections.   “Yes, this is how democracy works,” said Faisal Javed Khan....
Read more
Sports

ISLAMABAD – Federal Minister for Science and Technology Fawad Chaudhry on Tuesday confirmed that scientists from the Massachusetts Institute of Technology (MIT) are being...
Read more
NATIONAL

Each of the four provincial meteorological departments have predicted that there will be heavy fog in the four respective provincial assemblies on Wednesday, which...
Read more
- Advertisment -