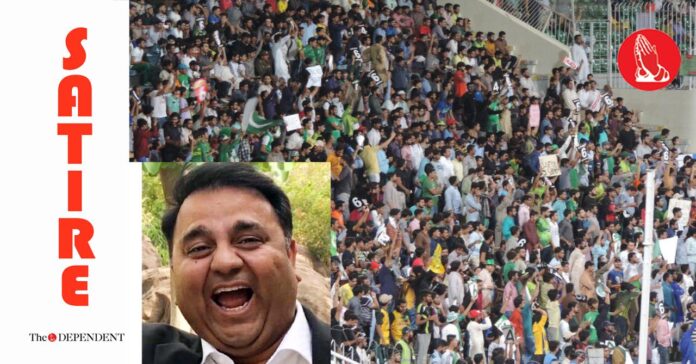 ISLAMABAD – Federal Minister for Science and Technology Fawad Chaudhry on Tuesday confirmed that scientists from the Massachusetts Institute of Technology (MIT) are being hired to help implement the government’s covid-19 standard operating procedures (SOPs) during the Pakistan Super League (PSL) matches at the Gaddafi Stadium in Lahore.

Talking to the media, Chaudhry confirmed that the government only allowed the full house for the PSL playoffs later this month under the condition that strict covid-19 SOPs will be adhered to, which includes maintaining a distance of six feet between two individuals.

“Of course, such a permission could not have been granted without thorough preparation. In this regard, the Ministry of Science and Technology can confirm that physicists from MIT are already working on developing equations that would make it possible for a full-house in Gaddafi Stadium to simultaneously maintain a six-foot distance between all individuals,” Chaudhry said.

Around 30,000 individuals will be packed inside full capacity Gaddafi Stadium, Lahore for the three playoffs and the final of the ongoing sixth season of the PSL. The MIT physicists have now been tasked with ensuring that those 30,000 spectators can be spread across the stands in such a way that they maintain a six-feet distance among one another, without expanding the stands, the stadium or the complex, Chaudhry confirmed.

“We are confident that once proven, this equation will land the MIT guys the next Nobel Prize in Physics,” the minister said.

“We are also hoping to send a nomination for the Nobel Peace Prize this year for that Pakistani who can accept being told to wear a mask without giving a murderous look. Hopefully both Nobel prizes will come from Gaddafi Stadium this year,” he added.

A caller during the Prime Minister’s live call-in session asked him to put the Federal Minister for Trade and Commerce on the line.   “Hello? Is...
Read more
NATIONAL

ISLAMABAD – Information Minister Senator Shibli Faraz said that after deciding to run the economy in the first half of the incumbent Pakistan Tehrik-e-Insaf’s...
Read more
- Advertisment -