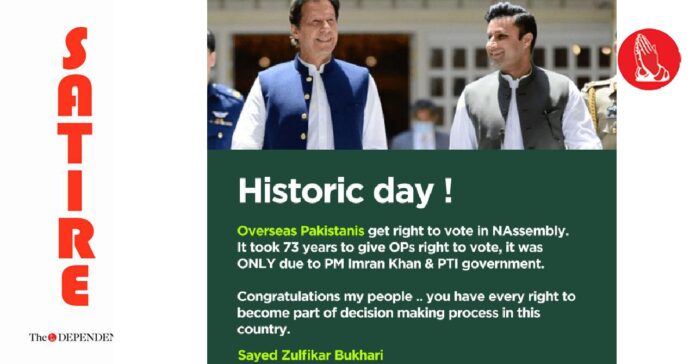 RAWALPINDI – Following the landmark decision allowing overseas Pakistan the right to vote for the National Assembly, further history is set to be made after it was confirmed that the move would soon be followed with allowance for Pakistan-based Pakistanis getting the right to vote as well.

The announcement was made by the selectors early Friday who said that after over seven decades of dictators or selected prime ministers, it is time that Pakistanis be given the right to vote in Pakistani elections.

“Vote, as in vote that will actually be cast by you, and not the vote that you think you cast but doesn’t count anywhere, least of all in the assemblies that you’re voting for,” a spokesperson of the selectors said while talking to The Dependent.

The selector confirmed that given 73 years of not really understanding how voting works, the masses would first be given time to get accustomed to parliamentary democracy and electoral norms.

“That might take another few decades or even centuries. This is why we are beginning the long and cumbersome process with overseas Pakistanis, many of whom live in countries where the vote that is cast is actually cast, or in countries where neither votes are cast and nor any need for such pretense exists,” said the selector.

“Furthermore, we are fully cognisant of the fact that overseas Pakistanis are the likeliest to vote for us, for our candidate, so might as well give them the actual vote,” the selector added.

- Advertisement -
Facebook
Twitter
Linkedin
WhatsApp
Email
Previous articleCivilians to eat up more than half of proposed Rs8.487 trillion budget for 2021-22
Next article‘What’s the point of selecting PTI when PML-N served you better,’ Ahsan Iqbal asks selectors