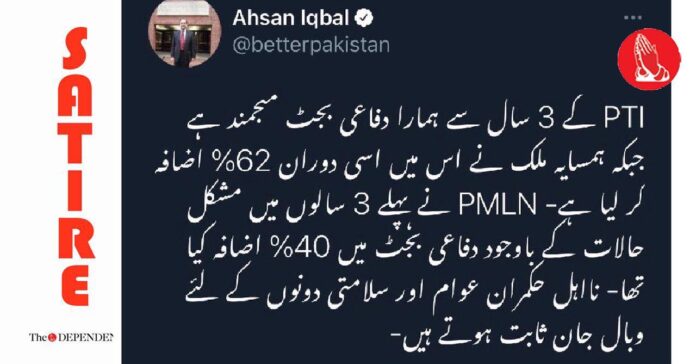 ISLAMABAD: Pakistan Muslim League-Nawaz (PML-N) General Secretary Ahsan Iqbal has asked selectors to have some heart and give an honest answer with regards to who their best servant has been.

Taking to Twitter on Friday, Iqbal asked the selectors if there really was any need to select someone else other than the PML-N, especially the Pakistan Tehrik-e-Insaf (PTI).

“Forget the 1980s, and early 1990s, which were the apogee of our symbiotic relationship, even in recent years has anyone served you better than the PML-N?” tweeted Iqbal.

“The PML-N increased the defence budget by 40 per cent – you know the same defence budget that is the symbol of subservience to you — but the PTI government hasn’t increased it at all. What was the point of selecting them when we served you better?” he further asked.

The PML-N general secretary further argued that given how defence budget is synonymous with military might and that the PTI’s detractors have long argued that the party was propelled to power via rigging just so the Army can get what it wasn’t getting under previous governments, the continued selection of PTI would ruin this narrative.

“Who would call you selector, if you are selecting someone that isn’t serving you the best?” Iqbal further tweeted.