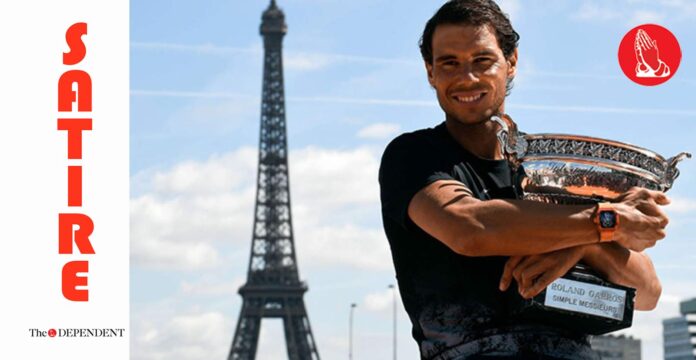 Nadal, who became the oldest man to win the French Open on Sunday, and extended his Grand Slam title lead over rivals Roger Federer and Novak Djokovic by two, flew to Lahore early Monday morning to pose next to Bahria Town’s iconic Eiffel Tower.

The Dependent, the only media outlet on the spot to take mesmerising images of the tennis player many consider the greatest of all time, captured the pride on Nadal’s face after completing what many considered an impossible task a fortnight ago.

Sources within the Nadal entourage confirmed that the Spaniard originally wanted to take Swvl to Bahria but was informed that the bus hailing service has paused its operations.

“Ride cash pe hai ya credit pe?” Nadal was asked after he tried to book an Uber to Eiffel Tower, with his first three requests being cancelled after the captains said “Bahria se waapsi ki ride nahi milti”, despite it being daytime.

The Dependent has also learnt that before entering Bahria Town, Nadal was asked to show his Pakistani ID, failing which the guards at the main gate kept his passport, which he was asked to collect on his way back.

However, The Dependent can confirm that Nadal managed to easily visit Safari Zoo and hang out in the park alone, even though authorities disallow outside male visitors without families at this time of the day.

At press time, Nadal was posing with his Roland Garros title next to Bahria’s famous Landseer Lions of Trafalgar Square, planning the short trip to the Ahram-e-Misr, to pose next to the large-sized sphinxes and cats.