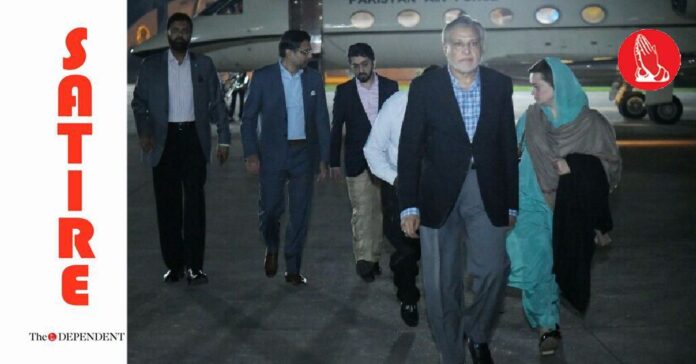 ON BOARD PAKISTAN AIR FORCE JET: Senior Pakistan Muslim League-Nawaz (PML-N) leader Ishaq Dar, who returned to the country on Monday after a five-year self-exile, wrote ‘vote ko izzat do’ [respect the vote] inside the lavatory of the Pakistan Air Force (PAF) jet that brought him back to the country, The Dependent can confirm.

The graffiti, an image of which has been exclusively obtained by The Dependent, was scribbled underneath the lavatory sink minutes before the PAF jet was scheduled to land at the Nur Khan Airbase in Chaklala, Rawalpindi.

Sources close to Dar have further informed The Dependent that the returning finance minister had been planning to send the message across for years.

“He has been practicing scribbling those words in his own bathroom at his London home,” revealed an aide, confirming that Dar’s move had been premeditated.

While the finance minister has defiantly put forth his stance at the heart of the den, critics argue that one can’t be sure if it was Dar who had scribbled the message given that others too were travelling on the aircraft with him, if indeed, critics claim, the words had been written at all.

The PML-N leadership has refused to comment on the development despite repeated requests, but The Dependent has evidence of the graffiti coinciding with Dar’s time in the lavatory.

The Dependent can also confirm that the graffiti had been duly erased when the PAF jet landed, with Prime Minister Shehbaz Sharif being the last to use it prior to the landing.