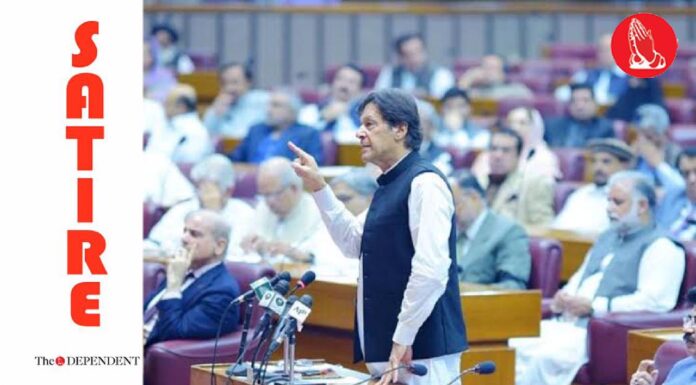 Islamabad/Sri Jayawardenepura Kotte: Prime Minister Imran Khan’s planned address to the Sri Lankan parliament, during his upcoming visit to the island country, has been cancelled after video recordings of the Pakistani premier were seen and heard by the Sri Lankan government officials, The Dependent has learnt.

Khan, who is scheduled to travel to Colombo on a two-day trip from Feb 22, is now planning a workshop with Sri Lankan opposition leaders, sources within the Pakistan Tehrik-e-Insaf (PTI) have revealed.

Sources further confirm that PM Khan has now planned a detailed training session instead wherein he will guide the opposition leaders how to oppose the government from both outside and inside the government.

Meanwhile, sources close to both President Gotabaya Rajapaksa and Prime Minister Mahinda Rajapaksa have revealed that both the Sri Lankan leaders saw multiple addresses of Khan in the Pakistani parliament before deciding that their federal legislative body could do without experiencing the aftereffects of “whatever the Pakistani PM smokes”.

“We already have a lot of our own cr*p to deal with. We definitely don’t want any of that next level s**t,” said a senior Sri Lankan government official while talking to The Dependent.

The speech to the parliament had been included in PM Khan’s itinerary on Pakistan government’s request, because the premier wanted to educate the Sri Lankan legislators on the gravest threat in the region.

“If he has something against (Leader of the Opposition) Sajith Premadasa, we’d be happy to reconsider our decision,” Abeywardena added.