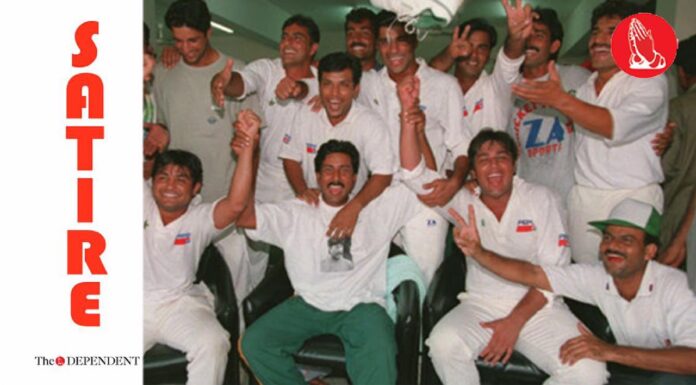 CRICKETABAD: The nation’s veteran cricket fans this week expressed their collective relief following the sudden realisation that the national cricket team’s dressing rooms across the decade of the 1990s did not have the presence of any social media accounts, especially Twitter.

Speaking to The Dependent in the immediate aftermath of the realisation, the subconscious of the nation’s veteran cricket fans confirmed that observing the recent Twitter activity of the current Pakistani team only gives them infinite reasons to be thankful for the lack of connectivity a couple of decades ago.

“Bigger players, bigger egos, bigger troubles, the 1990s teams would’ve self-imploded—even more than they used to—at hint of a possibility to do so, had they had such tools at their disposal,” said one subconscious tormented by Pakistani cricketers’ shenanigans for over five decades.

“Imagine the dressing rooms during and around the 1996 World Cup quarterfinal, or the 1999 World Cup match against Bangladesh – or even the final! And so much in between. The petty captaincy feuds, the fixing, the grouping, the politics — the devastating hashtags would just write themselves,” noted a 90s kid, expressing gratitude in blissful ignorance that allows his childhood heroes to still be that.

Even so, a section of the veteran cricket fans also confessed to The Dependent that they’d have preferred to see the unfiltered bits come out of that dressing room on live feeds.

“The world might’ve known more about some of the all-time legends busy selling washing powders these days,” remarked one fan.

March 1, 2021
Each of the four provincial meteorological departments have predicted that there will be heavy fog in the four respective provincial assemblies on Wednesday, which...