Shehryar Afridi is an encyclopedia on the art of wasting Senate votes, says Ali Gilani 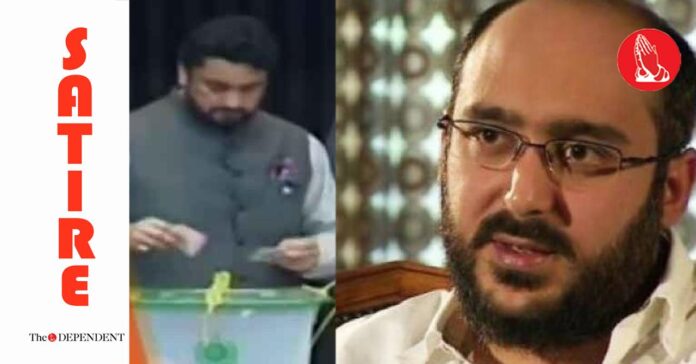 ISLAMABAD – Pakistan Tehrik-e-Insaf (PTI) leader and Chairman Parliamentary Committee on Kashmir Shehryar Afridi is an ‘encyclopedia on wasting Senate votes’, according to Ali Gilani, the son of Yusuf Raza Gilani, former Prime Minister and the triumphant candidate in Wednesday’s Senate elections from Islamabad.

Talking to The Dependent, Ali Gilani revealed that when he approached Afridi to discuss ways in which the latter could spoil his vote in the Senate polls, it was Afridi who actually ended up teaching Gilani a thing or two about vote wastage.

“Like other PTI members, I went to Shehryar Afridi with just a few tricks up my sleeve, but ended up being taught volumes on the art of wasting Senate votes. That man is truly an encyclopedia on the subject. It’s a shame there wasn’t any video for us to leak—that I know of!” Gilani told The Dependent.

“I just sat with them and began discussing possibilities, and he just stopped me there and then told me all kinds of innovative ways to waste the vote. And he only had to use one of them today [Wednesday], there are scores of others where that one came from,” he added.

When asked by this scribe if the method Afridi eventually ended up using was actually a bit anticlimactic given the claim that he had a range of ideas that he could’ve executed, Gilani maintained that the performance when it mattered the most was actually top-drawer.

“It was so simple that it was brilliant. Afridi masterfully pulled off the ‘oops I’m too stupid to know such a basic thing’ like an absolute genius. Hats off to the maestro,” Gilani said.