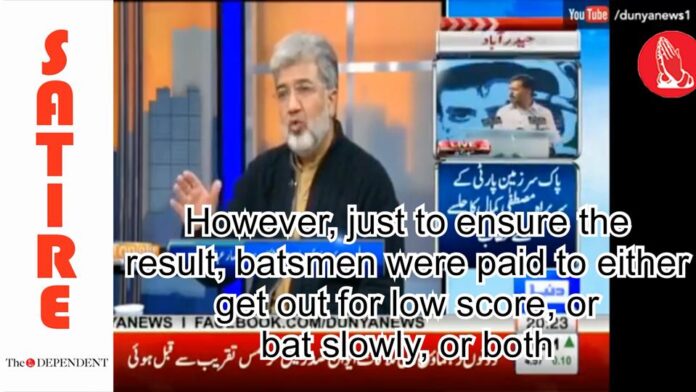 UNDISCLOSED LOCATION – A video showing journalist, hyper-moralist and nonexistentialist Ansar Abbasi confessing that he fixed the 2011 ODI Cricket World Cup semifinal between India and Pakistan has been unearthed by The Dependent.

“For me it was business as usual, but once the plan was aligned, the message was delivered. It was a clear message that Pakistani batsman would aim at chasing a score of over 250 as they traditionally do,” Abbasi is seen as saying in the video.

“To ensure the result, batsmen were paid to either get out for a low score, or bat slowly, or do both,” he added.

The leaked video solves the mystery regarding the match, which many sceptics had argued was compromised by bookies. In the video Abbasi further confessed that part of the reason he fixed the match was to avenge his fellow match-fixers.

“There was a recent raid on match-fixers who were really close to me. So it was a case of revenge as well,” he says in the video.

The video has a casual setting with the conversation looking like one between two informal friends and conducted in a similar manner. However, sceptics say that it could also be part of a talk show on a news channel. Sociologists maintain that it is hard to convincingly say given the similarity between the two settings.

Meanwhile, The Dependent approached Ansar Abbasi for comments, which he declined in a video sent to this scribe. In the video he threatened this scribe with the same tactics used by the Tehrik-e-Taliban Pakistan, which he confessed to having been a founding member of. The video will be uploaded soon.