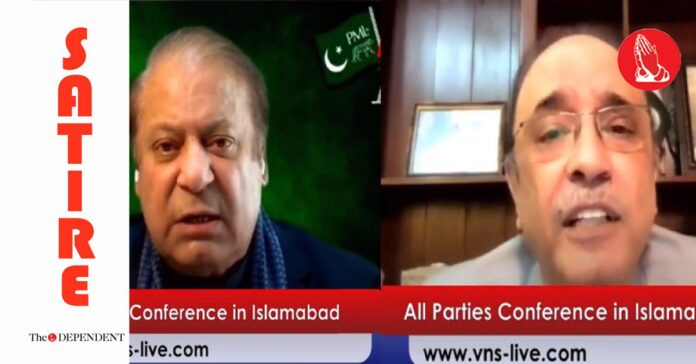 While addressing the PML-N’s Photoshop wing via video link from London, the three-time Prime Minister of Pakistan Sharif said that the images to be dropped from helicopters across the country “can be doctored if originals aren’t available,” sources within the wing have informed.

“You can easily find a few, but it might even be easier to photoshop them. Once the pictures are ready pass them on to the Image Distribution wing, which has been bolstered with new aerial distribution mechanism, including newly purchased helicopters,” Nawaz Sharif told the party workers late on Tuesday night, sources confirm.

Sharif also used multiple expletives for Zardari which cannot be reproduced identically in this space. One of them, a two-word insult, used the word surmayee (grey) to target the PPP co-chairman’s recent penchant for donning the grey colour and followed it up with sawaari (ride).

Sharif also used the label ‘only shade of grey’ to describe ‘Zardari’s politics’. These expletives and adjectives will be used to label the former president’s images that are to be dropped across Pakistan.

“Also, when we are all going back to the 90s, let’s go all out,” Sharif told the PML-N workers.