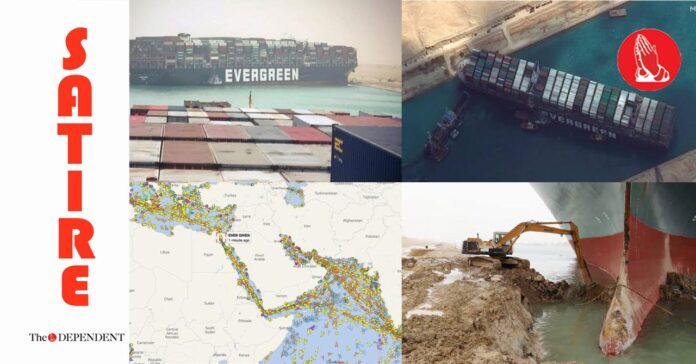 In an across-the-country, cross-media effort, the government has reportedly been exerting pressures on the nation’s TV news channels, newspapers and their respective digital outfits to give extensive coverage to the rare case of gross incompetence that cannot be linked to the ruling Pakistan Tehrik-e-Insaaf (PTI.)

“I got the call from the information minister and then also from ‘information minister’ Shibli Faraz,” said Azhar Abbas, Executive Director, Geo News. “He said that surely our journalistic credibility cannot have any issues covering an event that has actually taken place.”

“I told both of them that of course it wasn’t a problem,” he said. “It was only later that I realised it very much was a problem because they wanted it covered top of the hour, every hour. I mean, yes, it is an important international story, but not that important for Pakistan specifically.”

“Yes, I mean the blocking of the Suez Canal has reverberations in global trade and is bound to have effects in Pakistan,” said Zafar Abbas, Editor Dawn. “But we can’t keep covering it all the time, but they just wouldn’t let it go.  The lede, second lede and the third lede of the front page is what they insisted on.”

“They even wanted us to take the views of people on the street and for us to frame the question in a manner that made it clear – even though it obviously didn’t need to be made clear – that the PTI government had absolutely no role in this.”

TLP and PTI have same objective but… no wait, our methods also same: PM Imran’s subconscious

The PTI government’s law and order problems continue to pile up as a fresh kidnapping situation has emerged shortly after the successful retrieval of...
Read more
Entertainment

Fawad Alam starts long career of not being given chance to work with Mahira, Mehwish and Maya

Future Tehrik-e-Labbaik Pakistan (TLP) candidate for NA-62 and NA-55 Sheikh Rasheed Ahmed has said that he and his ministry will resolve the current violent...
Read more
NATIONAL

April 17, 2021
It seems the hits just keep on coming for former Federal Minster for Economic Affairs, Industries and production and Finance Hammad Azhar who recently...