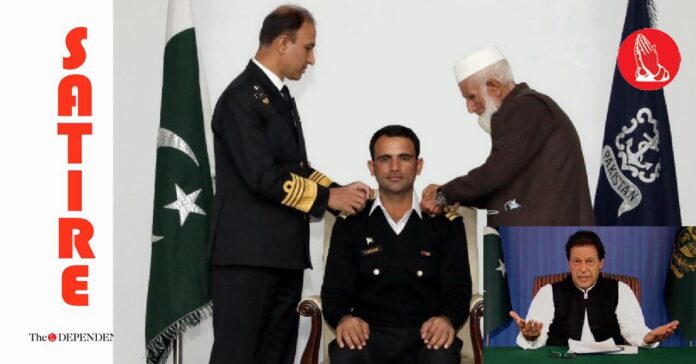 ISLAMABAD – Congratulating Fakhar Zaman on his breathtaking innings in the second ODI against South Africa on Sunday, Prime Minister Imran Khan said that the left-handed opener’s 193 off 155 balls reaffirmed the excellence of Pakistan’s Armed Forces and Pakistan Navy.

“All the credit goes to Pakistan Army and Navy for Lieutenant Fakhar Zaman’s world class innings. In fact all the credit for anything good that the Pakistan cricket team, or any other sports team, or any other group in any other field might be doing, goes to the Armed Forces,” the PM said in an address to the nation aired immediately after Fakhar Zaman got run out for 193, the highest ever ODI score batting second.

“Yes, it is all due to the Armed Forces that we are doing something good anywhere. This nation doesn’t have a history of producing great cricketers. Therefore, credit goes to others who are investing all they have in making this nation truly great,” the PM added.

“From politics to show business to cricket — sometimes overlapping at the same place — all is being run by the Armed Forces. So let’s stand up and salute them, and express our gratitude, as a nation,” the PM said.

A caller during the Prime Minister’s live call-in session asked him to put the Federal Minister for Trade and Commerce on the line.   “Hello? Is...
Read more
NATIONAL

ISLAMABAD – Information Minister Senator Shibli Faraz said that after deciding to run the economy in the first half of the incumbent Pakistan Tehrik-e-Insaf’s...
Read more
NATIONAL

MODIKAYAARABAD – The proud and patriotic nation on Wednesday was told that it is now collectively Modi Ka Yaar. The official announcement came after...
Read more
- Advertisment -