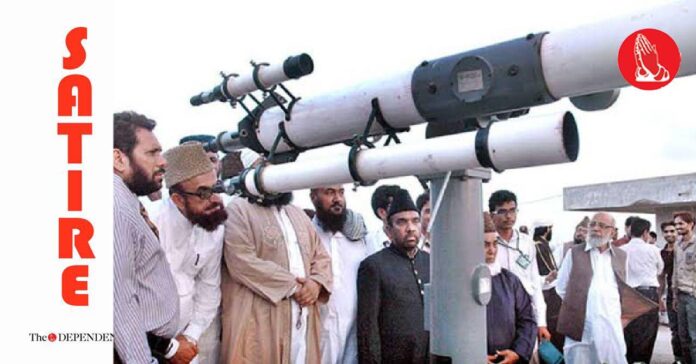 The PTI government’s law and order problems continue to pile up as a fresh kidnapping situation has emerged shortly after the successful retrieval of 11 Punjab police personnel earlier in the day. According to multiple reports Mufti Muneeb, the erstwhile chairman of the Ruet-e-Hilal committee, barged into the head offices of the country’s only moon sighting institute and took prisoner three of its telescopes.

Following the successful kidnapping, a video message was released on an anonymous social media page titled ‘moon always shines’, containing some disturbing images. All three telescopes had a copy of today’s newspaper hanging from their eyepieces, with a gun pointed at them from one end of the frame while a hand took turns aggressively fiddling with each of their lens focus mechanisms and tripods.

At the end of the sickening video, Mufti Muneeb’s voice can be heard spelling out his demands to release the telescopes unharmed. The following is the list:

Although the basis for the fourth demand remains unclear, there is a general suspicion that Mr Muneeb meant to say the French ambassador considering his recent alliance with the TLP that is demanding the same.

This is a developing story and will be updated accordingly …