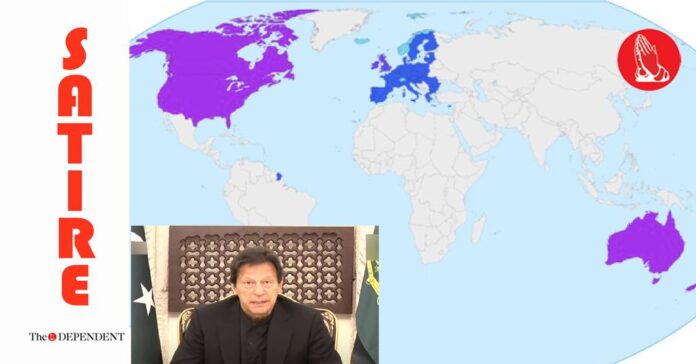 The nation-states and cultures collectively known as The West have expressed their discomfort at the routine utterances of an obsessive ex.

“Yes, we were in a relationship in the past,” said The West, speaking exclusively to The Dependent. “But it didn’t work out. It’s okay, it happens. No big deal. What followed it is really creepy.”

“Listen, we’ve been through breakups, we’re a mature culture. The cradle of democracy, the Magna Bloody Carta, the Renaissance, we can handle if someone’s not interested, specially if we weren’t all too interested either,” said The West.

“Happens. We’ve seen the sexual revolution and what have you, but this desi schmuck just doesn’t let it go. Dude, get a life,” added The West.

“He really needs to put his life back together. Should quit drugs. And he’s married, for God’s sake; he should focus on his wife and marriage.”

By the time this press report was filed, the ex messaged The West on WhatsApp, saying, “hey…..”

LAHORE/TORONTO – Responding to criticism over the duplicity between his party’s preaching, and its application in personal spheres for its leaders, Jamaat-e-Islami (JI) Naib...
Read more
Top Headlines

Israel has announced on Monday plans for making further settlements on the wrong side of history.   “Yes, these new settlements are further continuation of our...
Read more
Top Headlines

Ruling Pakistan Tehrik-e-Insaaf MPA Khurram Sohail Leghari has retracted his by now famous challenge of a physical fight to the Assistant Commissioner of the...
Read more
NATIONAL