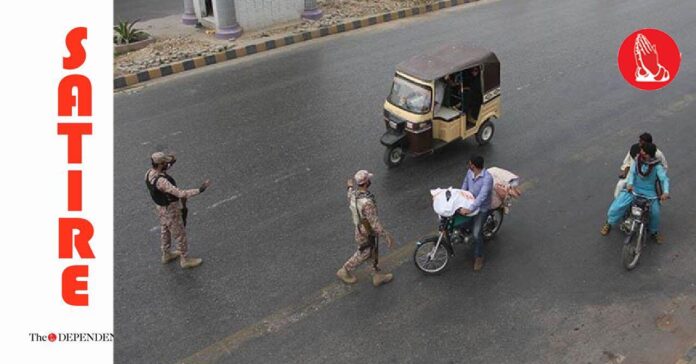 RAWALPINDI: After the interior ministry issued a notification for the number one deployment to enforce standard operating procedures (SOPs) for curbing the spread of the coronavirus, the SOPs have been updated to include shutting up about the defence budget, The Dependent has reliably learnt.

According to a document available exclusively with The Dependent the list of updated SOPs to counter covid-19 also includes “being nice to pizza parlours; saying thank you to custodians of ideological frontiers twice a day every day; liking and subscribing to number one jingle channel on YouTube; using patriotic hashtags on Twitter to target those predetermined as unpatriotic; dubbing ethnic rights movements terrorism; and using Indian abuses to justify similar abuses in Pakistan”.

“India’s example is really important. We should cite that and use that to ensure our safety,” Interior Minister Sheikh Rashid said while talking to The Dependent.

When asked by this scribe how he viewed the updated SOPs, especially the one regarding defence budget in the lead up to the budget announcement, the interior minister said, “shut up”.

While the updated covid-19 SOPs are yet to be formally announced, the National Command Operation Centre has already started urging their implementation.

“I had already warned you that the restrictions are going to be tighter soon,” the Federal Minister for Planning and Development and the Chief of the National Command and Operation Centre Asad Umar said while talking to The Dependent.

“Now please follow the new SOPs. These are important for your health — and lives — and indeed ours,” he added.