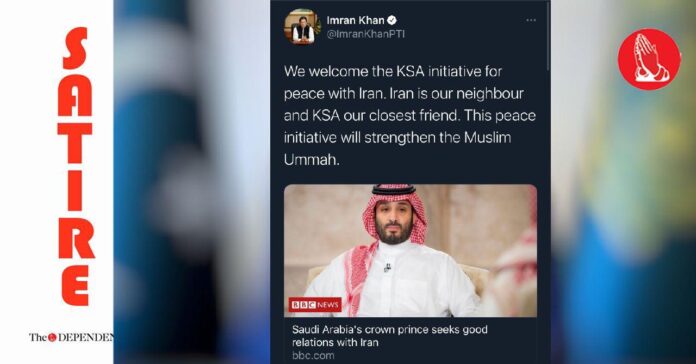 ISLAMABAD/BAGHDAD/RIYADH/TEHRAN: Pakistan has witnessed yet another diplomatic success as the country continued with its long-held position of mediating talks between Saudi Arabia and Iran. As representatives of the two countries met in Baghdad this month, Pakistan facilitated those talks by sharing news articles on social media in the aftermath of the meeting.

The decisive move on the talks between Riyadh and Tehran came on Wednesday, when Islamabad’s mediatory and reconciliatory diplomatic pedigree was deployed by Prime Minister Imran Khan, who took personal charge of the massive regional task by tweeting a BBC article.

“Pakistan’s policy has always been to reduce tension in the Middle East, and facilitate ties between our brotherly Muslim states Saudi Arabia and Iran. And this government is playing its part by curating content on Saudi-Iran meetings and disseminating it through various digital marketing strategies,” said Foreign Minister Shah Mehmood Qureshi while talking to The Dependent.

Qureshi confirmed that latest online marketing strategies are being deployed to enhance peace in the Middle East, and unity in the Muslim ummah, including Search Engine Optimisation (SEO), indexing pages, and guest-blogging.

“We are confident that the OIC [Organisation of Islamic Cooperation] would invite Pakistan as the guest blogger in its next digital media meet. With 13.6 million followers on Twitter, Prime Minister Imran Khan is our chief influencer,” said Qureshi.

Opposition parties, however, have severely criticised what they deem are the government’s ‘failures’ and deployment of ‘outdated tactics’.

“When PML-N was in power we were the pioneers of livestreaming mediation between Saudi Arabia and Iran. You might remember the footage from the trip of Mian Nawaz Sharif and Raheel Sharif,” the former foreign minister added.

Asif said that only PML-N deserves full credit for the Raheel-Nawaz memes generated in those mediatory trips.

“Mediation between Saudi Arabia and Iran is not for everyone. Only those who did diplomatic internet marketing course in exile in Saudi Arabia can excel in this.”