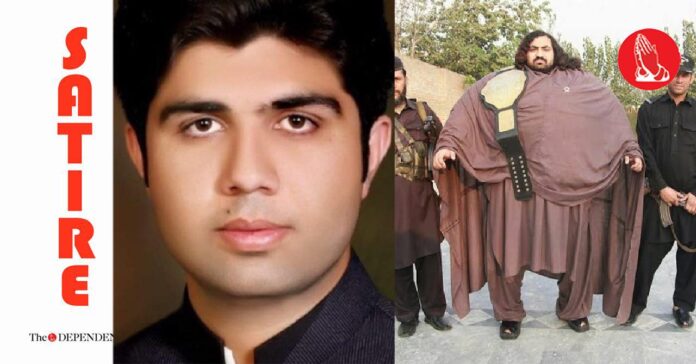 Ruling Pakistan Tehrik-e-Insaaf MPA Khurram Sohail Leghari has retracted his by now famous challenge of a physical fight to the Assistant Commissioner of the Jatoi sub-district of Muzaffargarh district after finding out that the officer in question is TikTok celebrity Khan Baba from Mardan.

Earlier, an incensed Leghari was angry at Arshad Virk (who he thought was the AC) when Virk’s mobile phone battery had run out mid-conversation with the MPA. Thinking Virk had shut down the phone on him, Leghari had made the aforementioned challenge.

After finding out that Virk was actually the Tehsil Municipal Officer (TMO) who was merely hearing the phone on behalf of the actual Assistant Commissioner, Khan Baba, Leghari immediately made the retraction.

“I think, I think…I think there has been a mistake,” said Leghari, laughing nervously at an impromptu press conference convened after the AC was unavailable to be informed of the retraction of the challenge. “These sort of things happen, hahah….these sort of things, misunderstandings…we should all work together for the betterment of Jatoi.”

Meanwhile, the situation was far more calm at the sub-district headquarters.

“Yes, I am from the PAS, 42nd Common, why does everyone act so surprised,” asked Jatoi Assistant Commissioner Khan Baba from the Dependent’s correspondent.

“What does that have anything to do with….okay fine, I had European History, Political Science, Gender Studies,” replied the AC in response to another question.

“It is too late for this retraction you speak of. The wish of the MPA shall be complied with and there shall be a fight at 11 o clock tomorrow behind the degree college, as he wanted.”

The Assistant Commissioner then proceeded to lift The Dependent correspondent for 3 sets of 16 reps as a shoulder press.