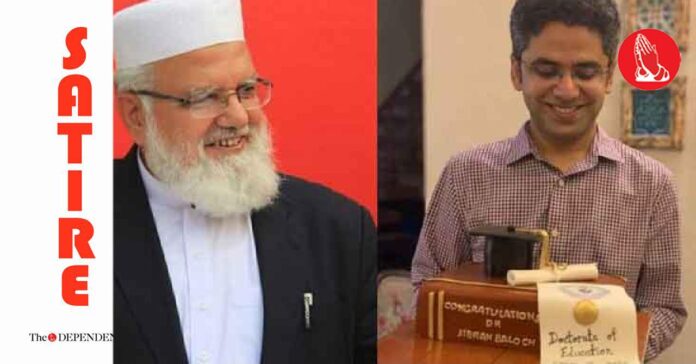 LAHORE/TORONTO – Responding to criticism over the duplicity between his party’s preaching, and its application in personal spheres for its leaders, Jamaat-e-Islami (JI) Naib Ameer on Monday lauded the role that his son played in upholding haya at the University of Toronto.

Talking to The Dependent in an exclusive interview, Baloch said he was proud of his son, who recently completed his PhD from the University of Toronto, for leading the JI’s student body Islami Jamiat-e-Toronto and ensuring Islamic codes across campuses in Ontario, Canada.

“I am proud of my son for excelling in his PhD while at the same time imposing Allah’s will at the campuses by maintaining gender segregation. Of course, it is easy for one to maintain segregation for oneself, but under his leadership IJT ensured the same for students at the University of Toronto and other campuses. He successfully imposed the eight-foot rule as the mandatory gap between male and female students,” the JI naib ameer said.

Baloch further confirmed that IJT was actively involved in beating female students across Toronto who were participating in sports.

“After Toronto Raptors won the NBA title in 2019, it became a serious challenge to stop all those girls in the city, province and all over Canada from playing basketball, but subhanallah the IJT was up to the task,” he maintained.

The JI naib ameer also confirmed that the IJT spearheaded a crackdown on couples across educational institutions, confirming that like other adherents of modesty the University of Toronto marks February 14 as Haya Day annually.

“Under my son, IJT helped keep distance between at least 9,437 couples in the University of Toronto alone over the past four years,” revealed Baloch.

“And these stats do not include the distancing imposed after March 2020, some of which can also be owing to the covid-19 pandemic.”

- Advertisement -
Facebook
Twitter
Linkedin
WhatsApp
Email
Previous article‘Pakistan is to Saudi Arabia what you are to the chief who brought you here,’ MBS tells Imran
Next articleNawaz Sharif’s recent views on national institution his personal opinion, clarifies PML-N