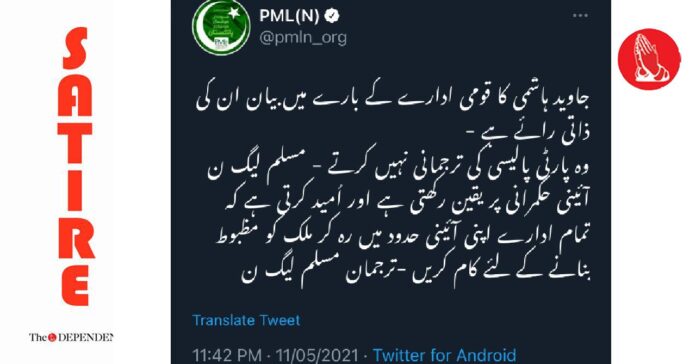 LAHORE/LONDON: The criticism directed by three-time Prime Minister Nawaz Sharif towards the only honourable and patriotic national institution in the country, is his personal opinion and should not be misconstrued as party policy, the Pakistan Muslim League-Nawaz (PML-N) clarified on Tuesday.

Nawaz Sharif, the supreme leader of the party, is not the spokesperson of the PML-N and does not necessarily represent the party named after him, the official Twitter handle of the PML-N further reiterated.

While the tweet issued to clarify the PML-N’s position was attributed to a party ‘spokesperson’, many of the leaders speaking on behalf of the PML-N weren’t available for comments on the record.

“Actually the institution has become honourable again after giving to izzat to votes that will be cast for us in the next elections,” said senior PML-N leader Zubair Umar while talking to the Dependent.

When approached for comments Nawaz Sharif confirmed that his critical views on the prestigious national institution did not represent Pakistan Muslim League-Nawaz.

“We have collectively come up with a good Nawaz, bad Nawaz policy. Which views of mine represent the PML-N and which do not are determined accordingly,” the PML-N supremo told The Dependent.