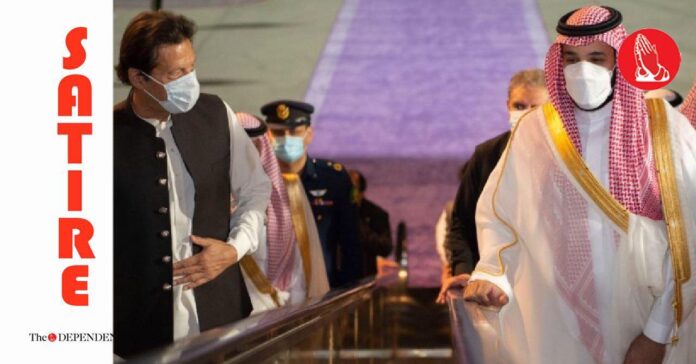 JEDDAH: Saudi Arabia Crown Prince Mohammed bin Salman has reiterated the importance of relations between Islamabad and Riyadh, telling Prime Minister Imran Khan that Pakistan holds the same position vis-à-vis Saudi Arabia, that PM Khan holds vis-à-vis the chief who brought him along during the trip to the kingdom.

Sources privy to the conversation have informed The Dependent that the crown prince told the PM that Saudi Arabia would continue to need Pakistan, just like the country’s chief needs Imran.

“Last year or so has showed that while one isn’t irreplaceable, but one can always win back trust by reiterating the kind of subordination that started it all,” MBS told Imran.

The prime minister met the crown prince in Jeddah during his three-day visit to Saudi Arabia and held wide-ranging talks on personal issues helping PM Imran, among other aspects of his being, in self-discovery.

“The talks were marked by the Prime Minister Imran Khan being at his best behaviour, thanks in large part to the guidelines and tireless rehearsals conducted by the chief, who the premier now finally understands has the same role in his sustenance that Saudi has in Pakistan’s,” noted a press release issued by the Ministry of Foreign Affairs.

In order to further help PM Khan understand the bilateral relations a few mock agreements were signed with him, in addition to the actual Memoranda of Understanding agreed with the chief.

The mock MoUs included an agreement on the establishment of the Saudi-Pakistan Supreme Subordination Council (SPSSC).