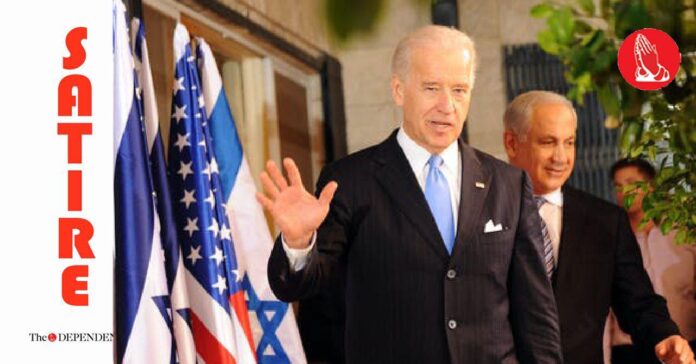 WASHINGTON/TEL AVIV/JERUSALEM – US President Joe Biden said Saturday that Israel has a right to defend itself from ballistic videos and images of Palestinian rubble and dead bodies in Gaza, and the missiles of guilt and accountability that are thrown at it.

Talking to the media, Biden said that after speaking with Israel Prime Minister Benjamin Netanyahu he hopes the surge in footages fired towards Israel will stop, reiterating Washington’s support in reaffirming Israeli sovereignty over its moral compass.

“I had a conversation with Bibi Netanyahu not too long ago,” Biden told reporters. “My expectation and hope is that images and videos will be closing down sooner than later, but Israel has a right to defend itself when you have thousands of footages flying into your country’s news feed.”

President Joe Biden said he was hopeful that a cycle of image sharing between Israelis and Palestinians would end soon, and said his national security team had been in frequent contact with resolution of the conflict.

“The launching of guilt-trips and moral brutalities need to stop. The US will do everything to protect calm of conscience and peace of mind in the region,” Biden said.