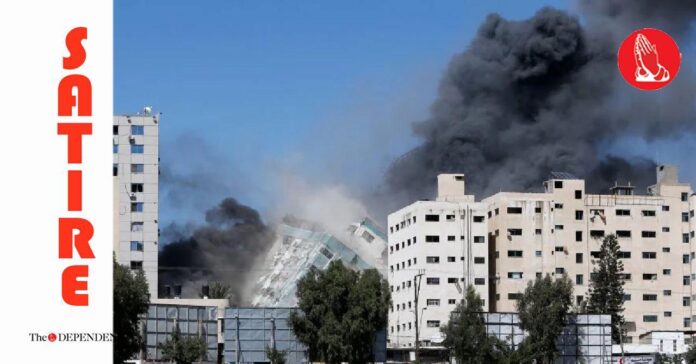 RIYADH – After weeks of rising Israeli aggression, forced evictions, carpet bombings and missile strikes, Saudi Arabia has condemned Israel for destroying the building that housed Al Jazeera and the Associated Press while there were no journalists present inside it.

“We condemn in the strongest words the Israelis for this attack. To see this beautiful building crumble … and that too without a single journalist inside breaks my heart,” said a visibly emotional spokesperson for the Kingdom.

“It’s just such a waste. We realise that Israel wants to destroy Palestinian infrastructure and targeted the building to attack any semblance of free and impartial press in the region, but this is a job undone,” he said.

According to international experts, while Saudi Arabia and Israel have been growing closer and collaborating, the destruction of the Al Jazeera building might be one issue where the Saudi Arabian establishment is where the country would draw the line in the sand.

“This is a very principled nation with a consistent stance on these issues. And this in particular is one of those issues that Saudi Arabia defines itself by and there are a lot of sentiments and questions of national identity involved,” one expert told The Dependent.