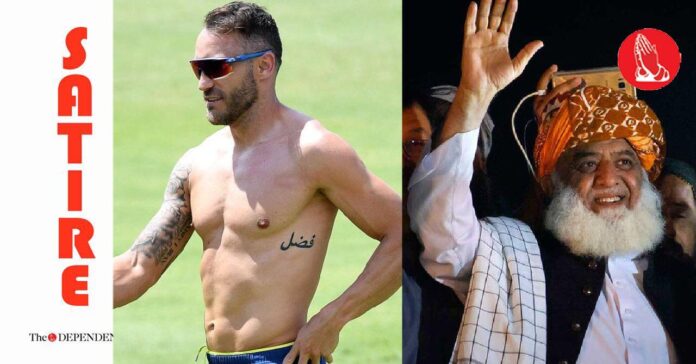 The announcement came in the shape of a tattoo that reads ‘Fazl’ which Faf flaunted in an image shared on social media, designed to pledge allegiance to Maulana Fazl.

“I hereby declare myself a follower of Maulana Fazlur Rehman and endorse his party the Jamiat Ulema-e-Islam Fazl. I hope to attend a JUI-F meeting the next time I’m in Pakistan for the Pakistan Super League,” wrote Faf on social media.

Talking to The Dependent, Maulana Fazlur Rehman confirmed that Faf has not only joined the JUI-F but also the PDM, ahead of the opposition alliance’s next meeting where the plan for upcoming protests will be finalised.

“We thought we needed to further fortify our movement against Imran Khan, by bringing our own handsome former cricket captain fond of taking his clothes off,” Fazl said.

“He may not have won a World Cup, but with everyone else we have at the PDM, Faf will definitely cover more bases, and help us dislodge the government,” he added.

The PDM president further confirmed that after Faf joined his party, the F—and fay in Urdu—now stands for both Fazlur Rehman and Faf du Plessis.

“JUI-F is now as much Faf’s as it is mine. Tattoos are haraam otherwise I’d have got one in Afrikaans that said ‘Faf’”

- Advertisement -
Facebook
Twitter
Linkedin
WhatsApp
Email
Previous articleRaheel Sharif-led 41-nation military alliance urged to supervise impartial elections in Israel
Next article‘Antisemitism would be if I praised the great Hitler which I’m not stupid to do,’ Qureshi schools CNN host