‘Antisemitism would be if I praised the great Hitler which I’m not stupid to do,’ Qureshi schools CNN host 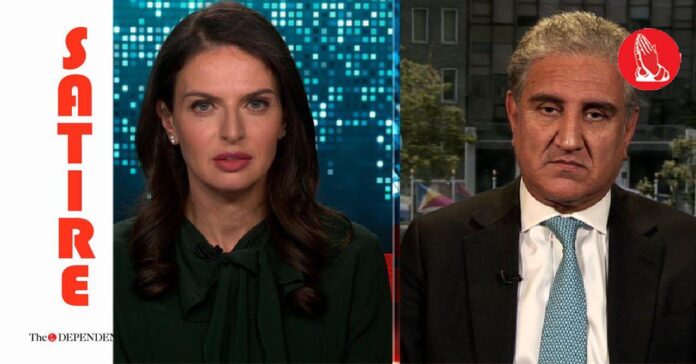 NEW YORK – Foreign Minister Shah Mehmood Qureshi on Thursday night schooled the CNN host Bianna Golodryga on what anti-Semitism is, after he was called out as anti-Semitic in an interview.

After being told that saying that Israel ‘controls media’ or has ‘deep pockets’ of influence is an anti-Semitic trope, Qureshi corrected the CNN host, reminding her that it would actually be anti-Semitic if he praised Adolf Hitler.

“No, actually it would be anti-Semitic if I praised the great Hitler, which I am not stupid enough to do here in front of you,” Qureshi said leaving the host masterfully speechless.

“You know I could have said that you know his famous words that he did something to some, and you know left some, so you know the world will know you know…” he continued after being interrupted by the host.

Golodryga told Qureshi that he was speaking of genocide, to which the foreign minister once again schooled the CNN host.

“No, that would be if I…” he continued as the interview was abruptly ended.

“And they call themselves flag-bearers of freedom of speech. They don’t think I know what anti-Semitism or genocide is,” Qureshi later continued while talking exclusively to The Dependent.

“I am a veteran diplomat, who has been made foreign minister by two different parties because I know the difference between what one says internationally and what one says at home: like praising the great deeds of Hitler, for example.”

“In fact, I’d have been prime minster a decade ago had it not been for that Yusuf Raza Gilani.”

Islamabad - After a short 19 day fling with a younger man that made the eyes of all other ministries turn, the Finance Ministry...
Read more
HEADLINES

ISLAMABAD – Prime Minister Imran Khan on Thursday lashed out at the opposition Pakistan Democratic Movement (PDM) for “making a mockery of democracy” in...
Read more
- Advertisment -

July 15, 2021
UNDISCLOSED LOCATION — The Taliban are willing to play in cricket stadiums in Gwadar and Gilgit-Baltistan, The Dependent has learnt. In conversations with the...