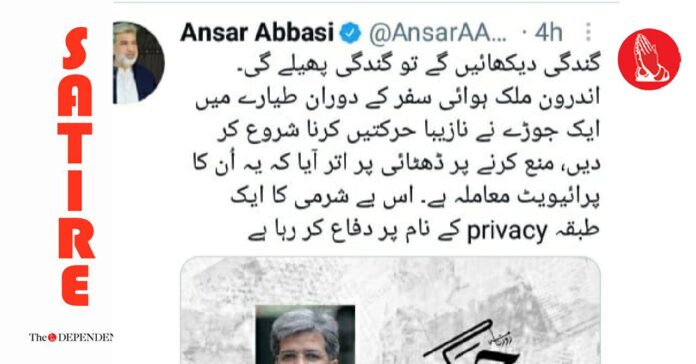 ISLAMABAD – After successfully role-playing as a journalist unearthing the sexiest and dirtiest secrets of the society, kinky Ansar Abbasi is all set for his long anticipated role as a naughty police officer, The Dependent has reliably learnt.

After writing another smoking hot column and narrating a steamy story of top-drawer softcore writing, Abbasi is now going to fulfill his longest suppressed fantasies, beginning with dressing up as an inappropriate, out of place, perverted cop.

“You’ve been bad bad people haven’t you all,” Abbasi was seen rehearsing in front of the mirror trying his new array of police uniforms that he’ll be wearing the next few days.

Sources confirm that Abbasi also has a stick with him, which he will use while arresting anyone being naughty anywhere within the intangible, but unbreachable, ideological frontiers of Pakistan.

“He also has a collection of whips, but that fetish of his was fulfilled in the 1980s,” a well-informed, supremely naughty, source informed The Dependent.

Sources further confirm that Abbasi in his kinky cop avatar won’t just be limited to chasing after those in public, ‘Ansar the shiraarti hawaldaar’, would also blatantly invade privacy as part of the role-play.

- Advertisement -
Facebook
Twitter
Linkedin
WhatsApp
Email
Previous articleAfter protests for Palestine in Balochistan, activists rally for Uganda’s water crisis in Thar
Next articleHamid Mir starts OnlyFans page where he will reveal what he meant that day