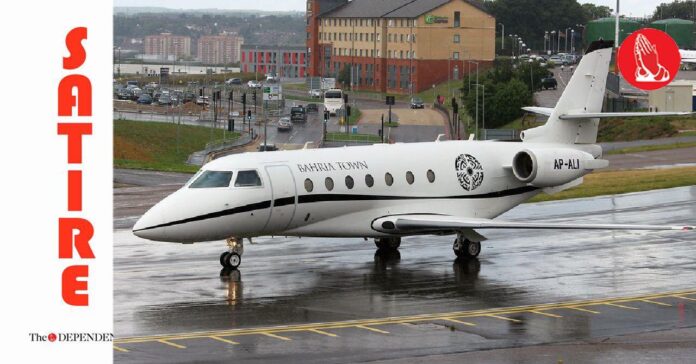 BAHRIA BASES, BAHRIA TOWN TORKHAM— The Central Intelligence Agency (CIA) is finally on the verge of getting airbases to host the US drones in Pakistan, after accepting a generous offer featuring a gamut of Bahria Town plots ranging from 50,000 marlas to 100,000 marlas, The Dependent has reliably learnt.

After meeting with the military leadership in Islamabad, CIA Director William Burns undertook a follow-up visit to Pakistan’s former Federally Administered Tribal Areas (FATA) to meet the actual, most powerful, man in the country.

“Of course, we’d have gotten any base, anywhere in Pakistan, if we offered the sufficient price, but in Bahria Town we feel we’re dealing with the empire that will take over from Askari as the true rulers of Pakistan,” a senior CIA official told The Dependent following Burns’ meeting with Bahria Town Founder and Chairman Malik Riaz.

Riaz had specifically prepared an advertisement, which is available exclusively with The Dependent, showing Burns an array of options to set up bases in Bahria Town, Karachi.

“Build the most luxurious airbases in the Af-Pak region,” begins the ad, confirming “possession handing over of first two plots in mid-June 2021”.

The ad begins with a majestic drone view focusing on the available plots where the US drones can be set up to ensure that the CIA helps prolong the Afghan War through the comfort of their deluxe living rooms in Bahria Heights.

The ad further shows CGI footage of William Burns and US Secretary of State Antony Blinken driving around Bahria Town Torkham in an M1A2 Abrams with production TUSK explosive reactive armor package installed in the tank.

“International standard weapon manufacturing outlets like Lockheed Martin and Raytheon will give you a sense of war community, and a feeling of being at home. An international standard replica of the US Foreign Service Institute (FSI) will educate your future keeping in mind your ambitions. The Grand Head Quarters, the largest army building in the world, near you will keep the zeal of war alive,” the ad adds.

“Bahria Town, where dreams are fulfilled, where lives culminate. Bahria Town, the new identity of Af-Pak geopolitics, the new owners of Pakistan.”