Hamid Mir offers to get shot by wife as further apology 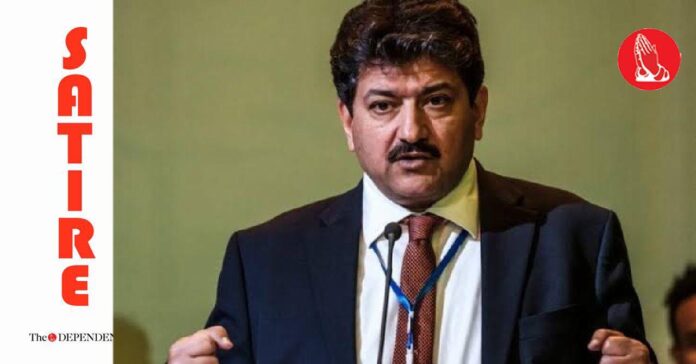 Famous journalist Hamir Mir has offered to get himself shot by his wife as the next installment of his apology for the statements he had made earlier.

On the 28th of May, while speaking outside the National Press Club at a demonstration protesting the attack on journalist Asad Toor at his residence, Hamid Mir had warned the establishment against attacking members of the press. He had also said that if they do not desist, he will also talk about issues like how a general was shot by his wife.

After Mr Mir’s speech the Geo TV management had decided to take him off air.

On the 8th of July, Mr Mir offered an apology if his speech hurt the feelings of any person. He said he had no differences with the army nor did he name any person.

Today, however, he made an additional offer to get shot by his wife by way of additional penance.

“My wife might not be willing to shoot me as we are rather fond of each other,” said Mir. “But by ‘wife’ I mean any wife. I don’t think there should be any problem in finding someone who fits the bill.”

Following Mir’s offer, the executive body of the Pakistan Federal Union of Journalists (PFUJ) have offered to call themselves from unknown numbers, asking them to stop reporting on the deep state.