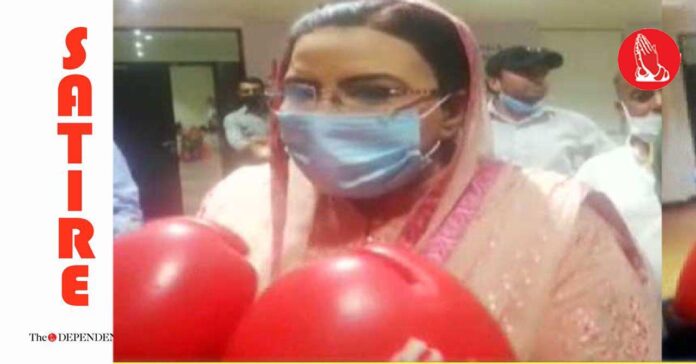 TOKYO/LAHORE/LAUSANNE/LAS VEGAS: Special Assistant to the Chief Minister on Information Dr Firdous Ashiq Awan has been given a late wildcard entry into the upcoming Tokyo Olympics, The Dependent has reliably learnt.

Sources within the Punjab government and International Olympic Committee (IOC) both confirm that Awan has been given a wildcard to compete in Boxing in the upcoming Tokyo Olympics after both the IOC and International Boxing Association (IBA) initiated and fast-tracked her entry into the summer games following a clip going viral last week.

“We’ve monitored Dr Awan’s progress in recent years and have always felt that the world is missing out on a phenomenal boxer. However, after last week we simply had to get her on board and requested the Punjab government to do the needful,” an IBA member told The Dependent.

Punjab government sources further confirm that while Awan is understandably excited to participate in the Olympics, she believes it is unfair to limit her skills to merely boxing.

“Hence, immediately after the Olympics, Firdous aapa will be taking part in a UFC (Ultimate Fighting Championship) contest,” the Punjab government official said.

Sources within the UFC have confirmed the development and said that to promote mixed martial arts in the country a match between Firdous Ashiq Awan and Logan Paul has been scheduled in Karachi on August 14.

A UFC official said that the selection of Awan has been made after witnessing her bouts against famous political opponents and her trash-talking skills seen in a Sialkot market.

The UFC official mentioned that acclaimed referee of fights Javed Chaudhary had been asked to referee the combat.

“But he excused himself because of lacking a spine and any morals. Instead, Kanye West would be the adjudicator,” the official told The Dependent. Proceeds of the event will be donated to a charity of loser’s choice.

Awan has been a pugilist since her days at medical school which she attended on a sports scholarship. She has honed her skills in the last few years on public television.

Have personally heard private phone conversations of journalists in which they spread false allegations about govt tapping phones: Gill

Have personally heard private phone conversations of journalists in which they...

October 23, 2021
Special Assistant to the Prime Minister Shehbaz Gill has alleged that some journalists are spreading malicious lies that the government is spying on them...